12 Hours in Macau: What to Eat 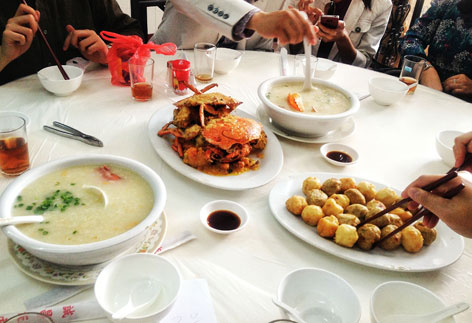 The spread at Seng Cheong [All photos by Juliana Loh].

In this guest post, Juliana Loh relays her itinerary for taking “heavyweight food friends from Hong Kong” out to eat in Macau for exactly 12 hours. Because it was during the Chinese New Year holidays, some of her favorite spots were closed, but she came up with great alternatives as needed—all listed here, should you ever have a 12-hour layover in Macau.

Pork chop buns at Tai Lei Loi Kei (called “Da Li Lai” in Mandarin)
In Taipa—the smaller of Macau’s two islands—this place is an institution. It used to have an outdoor eating area where people sit to eat pork chop buns, slurp noodles, and nibble on their curry fishball sticks, but after a few months’ closure in 2010, it reopened for takeaway only. Try the buo luo “pineapple” sweet bun, which contrasts nicely with the tender marinated pork chop. 18 Largo Governador Tamagnini Barbosa, Taipa 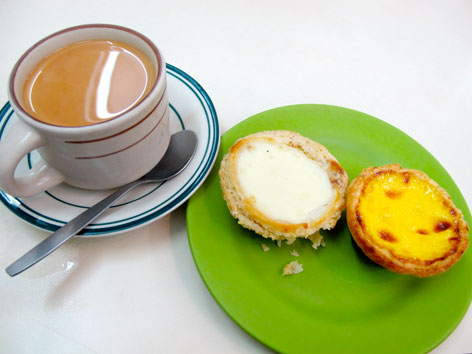 Egg tarts at San Hei Lou
A stone’s throw from Tai Lei Loi Kei is this cha chaan teng (local diner) that specializes in all sorts of egg tarts. Most people just walk past it, missing the lovely smells that spill over onto the streets. San Hei Lou is famous for its bird’s-nest Portuguese egg tarts, but even better are the regular egg tarts; the crust is more flaky-buttery pastry than crumbly shortcrust base. The coconut-milk version is interesting, but if you’re strict about authentic Po tarts, go with the egg tarts without the fancy dress.13-14 Rua do Cunha, Taipa 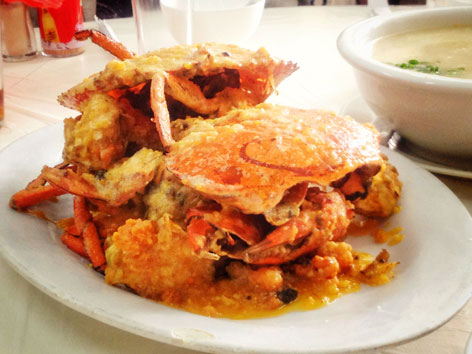 Crab congee at Seng Cheong
For (another!) pre-lunch appetizer, stop by Seng Cheong and get the famous crab congee. It serves about three people; if you’re a bigger party, also order the deep-fried crabs coated in delicious salted egg yolks (pictured above), which add a creamy, rich layer to the fried crabs. 28-30 Rua da Cunha, Taipa

Portuguese lunch at A Petisqueira
This is one of Taipa’s busiest and best Portuguese restaurants, where the local Portuguese go for their fix (Macau was handed over to the Chinese in 1999). Portions are hearty and generous, and the wine list offers a range of Portuguese wines: red, white, and green. Order the clams and seafood rice, and finish with a chocolate mousse. Rua Joao No.15 C/D, Taipa 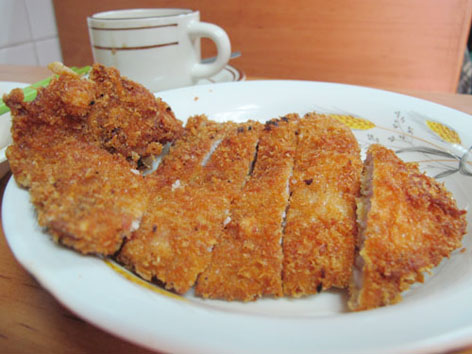 Pork chop noodles at Pui Kei Cafe For something more local, go to my favorite little diner, Pui Kei. This tiny cha chaan teng has wooden-booth seats, three round tables, and a huge red altar above the kitchen window; most diners share tables with strangers. Here are some of Taipa’s best pork chop noodles (jí lì zhu pá la miàn)—opt for the dry version and top it with an egg, then break the yolk for a delicious mix. Portions are generous: The deep-fried crispy pork rivals a good European schnitzel and is served with the bone intact. You’ll be served quickly here—to make like the locals, wolf it down and get out fast. 25 Rua do Cunha, Taipa 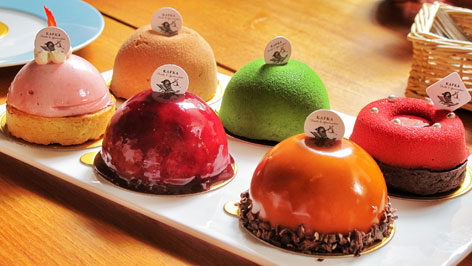 Pastries and coffee at Kafka Sweets & Gourmandises
This café—emblematic of the rising youth-driven, Western-style café culture in Macau—is one of the sweetest hidden spots in Taipa, and well worth the wait for a table. A Le Cordon Bleu-trained local chef churns out fabulous freshly baked pastries, made with the best selection of ingredients. 152 Rua de Braga, Taipa
In the same category of nouveau café, on the Macau side, is Single Origin, for great coffee by the only European-certified barista in Macau. 19 Rua de Abreu Nunes

Dumplings at Dumpling Town
This local diner does dumplings well, from pan-fried pork-and-chive to shrimp dumplings in chili oil. My favorite? The chicken satay dumpling, with a savory gravy and bits of celery inside. The almond milk tea, too, keeps me coming back—most cha chaan tengs add evaporated milk to their tea. It’s such a lovely twist to traditional milk tea. Come after 1:30pm, when the local crowds are done with lunch and you can find a seat. Prepare to share your table with strangers—this is another of those eat-and-run kind of spots. Beco D Arruda No.7 R/C 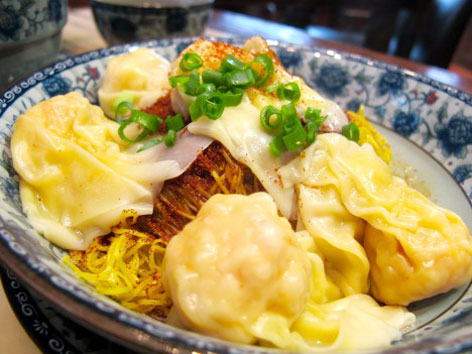 Egg tarts at Margaret’s Café e Nata
This is a great spot for tourists and locals alike. Tucked behind an alleyway opposite the Grand Lisboa hotel—the grand dame of gaudy architecture, it looks like a giant golden feather sprouting up from the ground—Margaret’s is always crowded, with its egg tarts usually sold out by 4pm every day. Edificio Kam Loi

About the author: Juliana Loh is a Singaporean living in Macau by way of Treviso, Beijing, and Hong Kong. Follow her journey on food, travel, and cultural discoveries at www.julianaloh.com/blog and on Twitter @bilbaobab. She has contributed to EYW extensively as user “bilbaobab”; see her profile page here.

Ed’s note: A version of this article originally appeared on http://julianaloh.com.