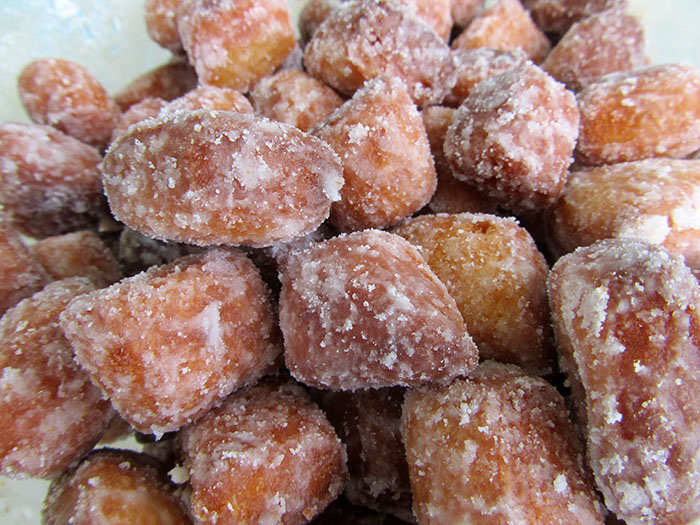 The twin-island republic of Trinidad and Tobago, part of the West Indies, enjoys a rich melting-pot cuisine derived from a multitude of far-flung cultures: Indian, African, Syrian, Lebanese, Italian, Chinese, Arabian and Creole. Over the course of its history, colonizers, laborers, and slaves all left their mark on the islands’ food, producing a delicious and uncommon diversity, even for the Caribbean.

Particularly on Trinidad—the larger of the two isles, where most of the population of 1.3 million lives—the must-eat foods of this fusion cuisine are readily available and easily accessible. But for some dishes (as well as incredible beaches), you gotta hit up Tobago. Here are eight of our favorite “Trinbagonian” foods to get you hungry for a visit. 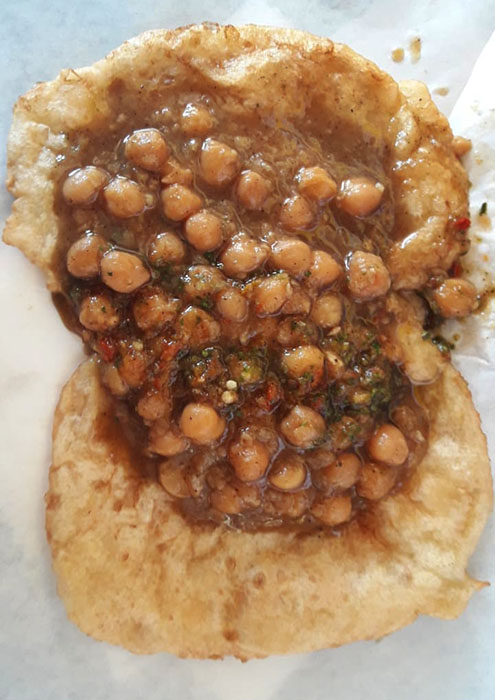 Who doesn’t love Trinidadian doubles? All photos courtesy of Nadia Ali except where indicated.

A signature handheld Trinbago food generally available for breakfast and lunch, doubles consist of two fried split-pea-based roti (flatbread) with a channa (chickpea) and potato curry sandwiched in between. Your choice of accompaniments includes pepper sauce, a tangy cilantro sauce, tamarind sauce, grated coconut, or grated cucumber. Or all of the above!

This iconic dish gets its name from the two pieces of fried bread: doubles. As you can guess, it reflects the islands’ heavy Indian influence and current demographics: Roughly 40 percent of Trinidad and Tobago’s population is of Indian origin. (If you’ve ever had chana bhature, this will taste familiar.)

Where to find it: Doubles are sold in stalls set up on the pavement. Often you will spot a crowd of hungry people standing around waiting for service before you actually see the stall. Certain established doubles stalls are around throughout the day, while makeshift stalls pop up for the morning only. Among the established ones are UWI Doubles, located near the university (map); Sauce Doubles, at Curepe junction (map); and Ali’s Doubles on the Hill in Vistabella (map). 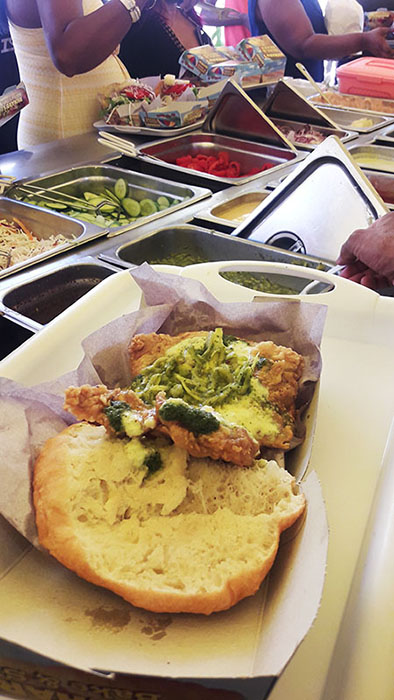 Doctoring up some bake ‘n’ shark

Bake ’n’ shark refers to a fried fillet of fish served between two pieces of fry “bake”—a thick, roti-type dough that’s fried to create a spongy, soft bread. Typically the fish is, of course, a small shark, but another mild-tasting fish (i.e., tilapia, kingfish, grouper, skate) can usually be substituted if available.

The fish is placed between the bake and served plain—a canvas for you to doctor up. You then choose from eight to 12 accompaniments that you can add to your taste: mustard, ketchup, pepper sauce, sliced cucumber, tomatoes, lettuce, thousand island dressing, mayonnaise, pineapple, local bandania sauce (aka chadon beni sauce, which tastes like garlicky cilantro, with a kick). The dish’s name indicates where you will find this popular dish: the beach. Specifically, it’s associated with Maracas beach, on Trinidad.

Where to find it: While there are many beachside vendors peddling this dish at Maracas, the most popular is Richard’s Bake ’n’ Shark (map). It’s located on North Coast Rd. in Maracas Bay Village, right on the sandy beaches of Maracas at the farthest end (beyond the yellow lifeguards’ building). 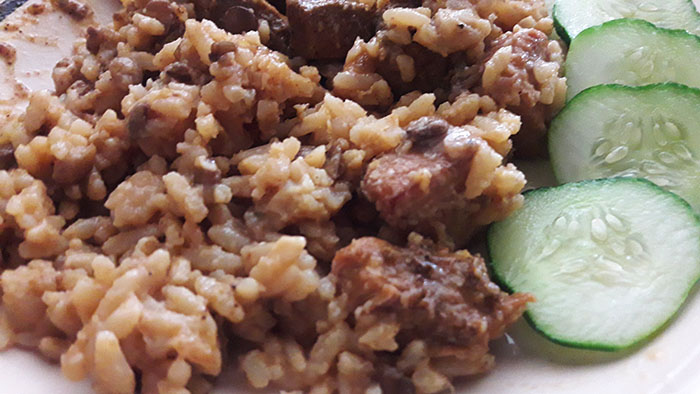 Pelau is a Trinbago dish that tells a story.

Pelau, one of the tastiest one-pot creations and a nationally beloved dish, is essentially stewed meat cooked with rice and vegetables (peppers, tomato, carrot, ginger, onion, often pumpkin). The true taste of the Caribbean comes through in the pigeon peas (or black-eyed peas) and coconut milk that’s also added.

The origins of pelau reflect the islands’ diverse history. While it’s clearly related to pilaf/polow (of Middle Eastern origin), pelau here came from the East Indian indentured servants who knew how to make pulao. The one-pot cooking method, however, as well as the tradition of caramelizing the meat in burnt sugar, is credited to the region’s former African slaves.

Where to find it: Pelau can be found in many local restaurants, hotels, and, of course, people’s homes: This is a comforting, welcoming, bring-your-friends kind of dish. For a truly Caribbean restaurant in a homey, traditional Trinbago setting, try the pelau at Veni Mange on Ariapita Ave. in Port of Spain (map). 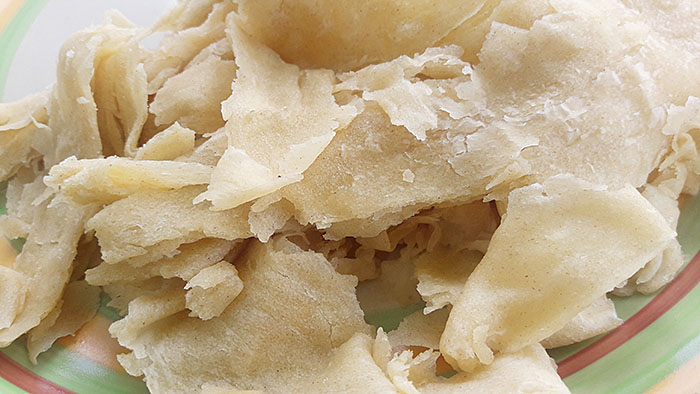 Most people who are familiar with roti know that it looks and tastes similar to a tortilla or another flatbread. However, while that type of roti is available in Trinidad and Tobago, the paratha roti is more unique in flavor, taste and appearance (and no, it’s not the same as Indian paratha).

Locally known as “buss up shut”—so-called because it resembles a tattered, or busted-up, shirt—paratha is a flaky, silky-soft roti that’s clapped together with large paddles to produce something resembling a pile of rags. But it tastes the best! Accompanied with curry or stew meat or vegetables, it is commonly served at Indian weddings and events.

Where to find it: Buss up shut roti can be found at local Indian restaurants and roti shops. When purchased, it’s usually wrapped in the kitchen with your choice of filling such as stew or curry meat, curry channa (chickpea), curry potato, curry mango, pumpkin or bodi (a type of broad bean), and wrapped in greaseproof paper. Roti shops, like Hosein’s Roti Shop (corner of Independence Square and Henry St., Port of Spain, map), can be found along most roadways of both islands and are a staple of Trinbago cuisine. 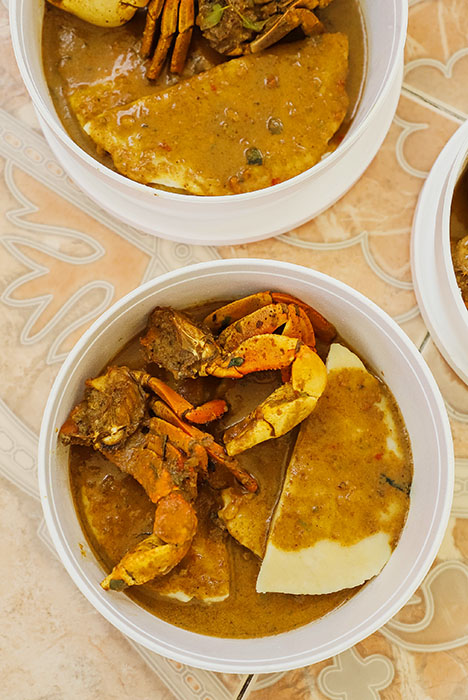 Get messy with some crab ‘n’ dumplings. Photo courtesy of Visit Tobago.

When you say “crab ’n’ dumpling,” the place that comes to mind is Tobago, not Trinidad. The name describes it accurately: Sticky pieces of dense, roughly cut dumplings are cooked in a mild coconut-milk curry sauce with curried crab (typically blue crab, but depends on availability). It’s a messy meal—you will get your fingers dirty mopping up the sauce with the dumplings, breaking apart the crab—but it’s worth it. This dish is another essential one reflecting Indian influence.

Where to find it: Being a signature dish of Tobago, you can find crab ’n’ dumpling at various places in and around that isle. One of the best places to enjoy it is at Miss Jean’s, located close to the airport in Crown Point (map). 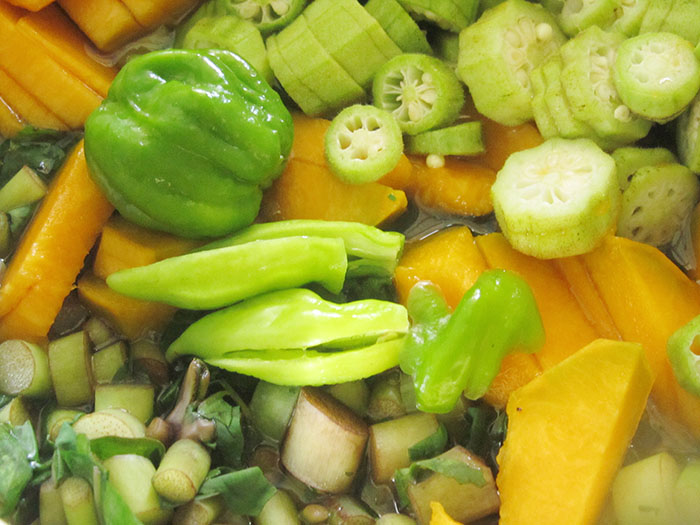 This creamy, flavorful green dish is a one-pot wonder with strong roots in West Africa (just check out these palaver sauces, or plasas, of Sierra Leone). Callaloo is popular across the Caribbean (particularly Jamaica), though it’s a little bit different one each island. Here, it’s a Sunday favorite served with chicken, macaroni pie, fry rice, and vegetables consisting of boiled dasheen leaves (from the taro plant), okra, pumpkin, scotch bonnet pepper, garlic and onion all melted together in coconut milk. It’s a unique taste and consistency—a little bit slimy—but definitely worth seeking out.

Where to find it: Callaloo is served in restaurants that offer local or Creole food, as well as roadside cafes. You can find a reasonably priced callaloo at Irie Bites (71a Ariapita Ave, Woodbrook, map). 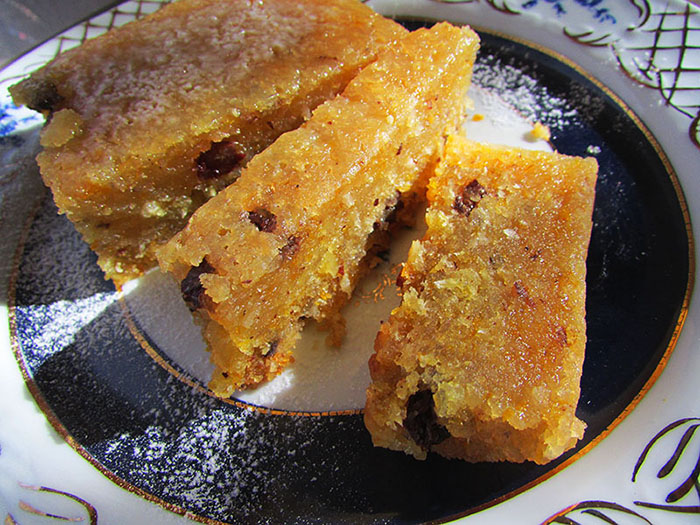 When it comes to Trinbago desserts, there’s one queen of puddings that you simply must try, and that’s cassava pone. Thick, sticky, and moist, it is one of the most locally loved desserts. Made from three main ingredients—grated cassava, coconut and pumpkin—bound together with sugar, cinnamon, milk, and raisins, this baked good is a solid slab of sweetness.

Where to find it: Bakeries, such as Linda’s Bakery (23-25 Saddle Rd, Maraval, map), are the best place to track this down. But you can even find it packaged in supermarkets like Massy Stores, with multiple locations (look for one of the 13 branches with an in-house bakery) including on Western Main Rd., Westmoorings (map).

Kurma is another beloved sweet made popular by Indians in Trinidad and Tobago, who would prepare it for Diwali, the Hindu Festival of Light. It’s one you can easily eat on the go, as a snack; in fact, it’s often given away at religious functions and weddings. To make it, fried ginger-spiced dough is coated in sugar syrup and left to harden or crystalize. If it sounds like a doughnut, it is definitely similar, but crispier and smaller.

Where to find it: You can order fresh kurma in Trinidad from Sweetie Pie, 52 Mowlah Trace, Aranguez, San Juan (map). But supermarkets sell pre-packaged kurma, so you can also grab a few bags for edible souvenirs later: Just pop a couple in your suitcase for friends and family back home before you leave.

About the author: Nadia Ali is a freelance writer and author. She has traversed the world from the waterfalls of the Caribbean to the lochs of Scotland. Her travel features have been published on the internet and in print. Follow her on Twitter at @NadiaAwriter. 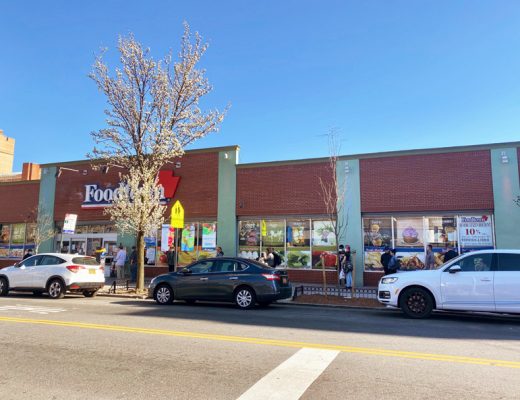 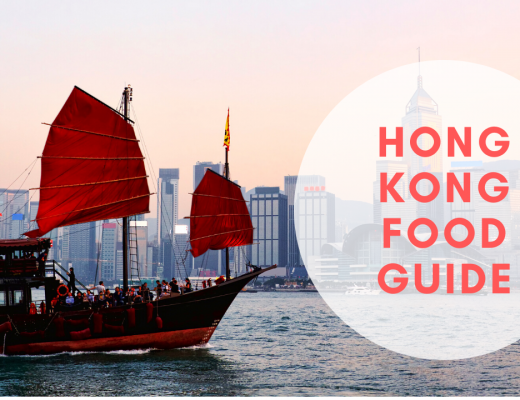