Some required viewing for when you don’t want to cook, you don’t feel like reading, and you’ve already eaten. 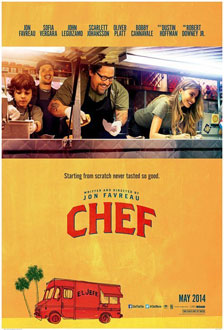 This cooking comedy, filmed in mock-documentary style, emphasizes the influence that modern social media can have on a chef’s reputation. Directed by and starring Jon Favreau, the audience gets an insider’s perspective of what it’s like to be the head chef of a once hoity-toity Los Angeles restaurant. Chef Carl Casper (Favreau) can’t deny that his cooking has seen better days when an unpitying food critic dines at his restaurant and tweets about how disappointing the meal was. Furious, Carl, once known for his creative food, becomes more famous for the public blowout he unleashes on the critic, right at his table. He quits the restaurant, but his need to cook propels him to find a way to spend his days over a stove. He and his cooking companion, Martin (John Leguizamo), restore a big, booming beast of a food truck into a restaurant-on-wheels, called El Jefe.  With his young son along for the ride, Chef Carl and his new team embark across America, doling out Cubano after Cubano to hungry followers of his food truck and reinvigorating his passion for cooking in the process.

Quote: “A food truck’s a great idea. We’re talking about a white-on-white, ’88 Chevy food truck. It’s a blank canvas for your dreams.”

Rotten Tomatoes critics’ score (for those who care): 88% 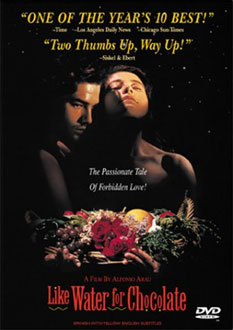 Based on the book by Laura Esquivel, this romantic food film, directed by Alfonso Araul, takes the audience into the supernatural kitchen of young Tita de la Garza (Lumi Cavazos), living in Mexico during the Mexican Revolution. Tita, the youngest daughter of a widow, has been predetermined by family tradition to never marry, but to take care of her mother (Regina Torne) until the day she dies. This tradition’s obstacles become apparent when Tita meets Pedro (Marco Leonardi), with whom she falls in love. Because her freedom to express emotions is limited, Tita learns how to communicate and carry out a secret romance with Pedro through the food she cooks. Tita and Pedro demonstrate that the same flame of desire that burns in romance is often the same flame that fuels the cooking of a chef in love. The magic of Tita’s kitchen is powerful, and all who eat her food cannot avoid being cast under a delicious spell.

Foods you’ll crave: A wedding cake that reduces all guests to tears, quail in rose-petal sauce made from a bouquet that Pedro gives Tita, a homemade meat broth that heals Tita’s homesickness

Telling quote: “Nacha [Tita’s nanny] swept up the residue the tears had left on the red stone floor. There was enough salt to fill a 10-pound sack, and it was used for cooking for a long time.” 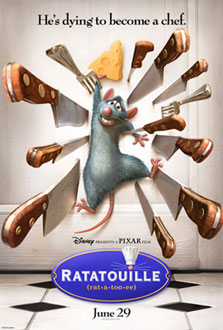 In this animated film, directed by Brad Bird and Jan Pinkava, Remy (voiced by Patton Oswalt), a rat with a refined knack for distinguishing between the subtlest of flavors, meets only resistance from his father (Brian Dennehy) when he speaks of his aspirations in a gourmet profession. As luck would have it, Remy becomes situated in a sewer beneath the restaurant owned by his culinary idol, Auguste Gusteau (Brad Garrett). The ball of chaos starts to roll when Remy’s stubborn persistence to cook meets with a kitchen full of human chefs determined to keep all rodents—especially rats—out of their beloved cooking haven. Ratatouille evokes the lesson that unlikely opportunities come to those who doggedly pursue their dreams, especially in Parisian restaurant kitchens.

Places you’ll go: All levels of Paris, from the bottom of the sewers to the opulent tabletops of the highest-ranking bistros

Foods you’ll crave: An omelet prepared with farm-to-table basil (foraged by Remy himself),freshly baked baguettes that invoke a chorus of crackles upon first bite, and, of course, ratatouille

Telling quote: “You must try things that may not work, and you must not let anyone define your limits because of where you come from. Your only limit is your soul. What I say is true: Anyone can cook, but only the fearless can be great.” 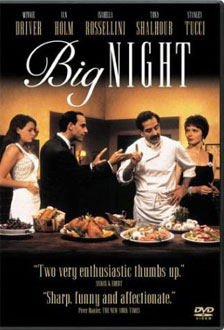 For this film, directed by Campbell Scott and Stanley Tucci, the title says it all: Two Italian brothers aim to save their crumbling restaurant with one epic feast.  Primo (Tony Shalhoub) and Secondo (Stanley Tucci), the Abruzzo-born brothers who operate an authentic Italian restaurant in 1950s New Jersey—one more focused on risotto than spaghetti-and-meatballs, to the chagrin of some diners—are deeply enmeshed in family conflict, relationship drama, and emotional breakdowns. Word reaches the brothers that Louis Prima, the famous Italian-American music star, will be dining at their almost-fallen restaurant, sparking them to put literally everything they have left in energy, money, and passion into preparing him an exquisite meal. Rival establishments, major personality differences, forbidden affairs, and a plethora of exaggerated hand gestures all help stir the pot once it’s boiling. The soundtrack of this film helps emphasize the themes present in every Italian kitchen: playfulness, passion, and lots and lots of pasta.

Telling quote: “To eat good food is to be close to God” 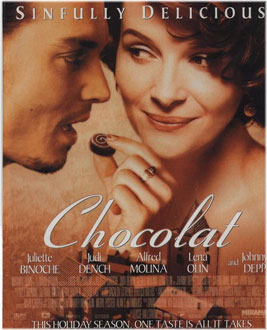 Based on Joanne Harris’ mystical novel and directed by Lasse Hallström, this story of sweets illustrates the influence, both societal and political, that food can have on a community. In the winter of 1959, Vianne Rocher (Juliette Binoche), a young single mother, moves to the tiny, traditional French village of Lansquenet-sous-Tannes with her six-year-old daughter. Vianne innocently opens a chocolate shop right at the beginning of Lent—a blasphemy to the townspeople in this theocratic town, where the stolid Comte de Reynaud (the mayor, played by Alfred Molina) has the last word on who’s condemned and who is safely evading sin. However, as the locals begin indulging in her sinfully delicious craft—in secret, of course—mind-sets begin to shift and a political division unravels. Gypsy celebrations lit by bonfire, decadent mugs of hot cocoa, and the magic of Easter anticipations all give this film the dreamy quality that chocolate fantasies are made of.

Places you’ll go: Flavigny-sur-Ozerain village in Burgundy; the Rue de L’ancienne Poste in Beynac-et-Cazenac on the Dordogne River in Dordogne. (The river scenes were actually filmed elsewhere in Europe, in Fonthill Lake at Fonthill Bishop in Wiltshire, England, for the curious.)

Quotes: “Good morning, can I interest you in some Nipples of Venus?” 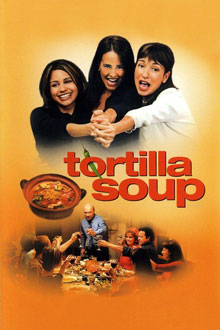 The three daughters of Martin Naranjo (Hector Elizondo) couldn’t be any more different—in fact, the only thing they have in common is that they all live under their father’s roof in Los Angeles.  This eclectic group of Mexican-American sisters includes Leticia, an uptight, cardigan-clad chemistry teacher; Carmen, a semi-promiscuous career woman who takes after her father; and the spunky, 19-year-old Maribel, whose vivacity and contagious giggles often mitigate the frequent family shouting matches. Their father, a sage of the kitchen, owns a catering company and holds his house together by honoring the Naranjo family tradition of always having dinner together. This film, directed by Maria Ripoll, is full of scenes that sizzle, both on the pans of spicy Mexican cooking and in the love lives of each of the women as they evolve in very unexpected directions. Fiery Latina sass adds to the pungent mix of flavors already boiling in this crowd-pleasing cultural household.

Quote: “I love toppings. Sometimes I go to restaurants and I just order toppings.”