Every so often, a dish or drink is so beloved, so synonymous with a place that we just have to pay it a little extra mind. 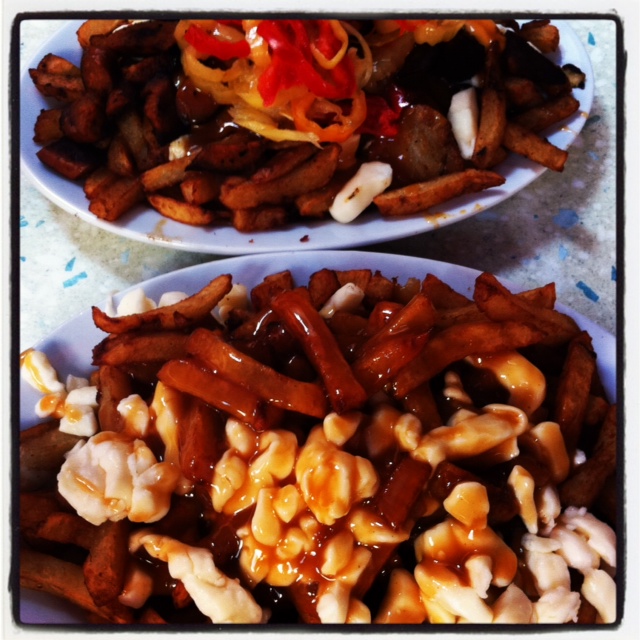 Poutine. The mere thought of it gives you a guilty thrill, doesn’t it? The idea of going to a city where it’s perfectly acceptable—indeed, expected—to plop yourself down at 2am and brazenly order a giant plate of French fries smothered in cheese curds and brown gravy speaks loudly to our inner gluttons. It says, Go to Montreal. Now.

In New Jersey, where I grew up, it’s also a common thing to go to a late-night diner and gorge on such alcohol-soaker foods. Greasy eggs were always a favorite order, as were “disco fries,” or cheese fries with gravy. What I didn’t know back then was that disco fries are, essentially, a down-and-dirty Jersey version of Quebec’s poutine: Instead of fresh, regionally sourced cheese curds, our fries were usually doused with a melty, processed-cheese sauce à la Cheez Whiz. But it’s not such a popular order once you’re out of the 10-and-under or 18-to-22-year-old age groups, and it’s buried on giant menus that span potato skins, roast prime rib, and pasta primavera.

In Montreal, poutine has widespread lasting power. Whole greasy-spoon-types of establishments are dedicated to the stuff (and maybe a few steamies, or steamed hot dogs). These poutine menus don’t end at cheese curds and gravy; they move on to get doused in Italian-style tomato sauce or to include pepperoni and merguez sausage, and from there they exit the greasy spoon and enter a more sophisticated realm, steadily climbing the ladder to foie gras and duck confit—rich, playful, decidedly high-end spins on the humble classic.

According to The New York Times, poutine—which is pronounced “poo-tin,” not “poo-teen,” by the way—has been a source of embarrassment for certain Quebecers over the years, who wonder how on Earth it of all foods wound up as something of a national dish. Come on, Quebec: You’ve given us all an excuse to eat a pile of fries, cheese, and gravy. Are you really surprised?

Read more about poutine in our full entry here.