Winston-Salem might be better known for Krispy Kreme doughnuts, tobacco-industry ties, and handcrafted wood furniture, but it’s also got an interesting (and edible!) streak of Moravian history in it. Our local writer fills us in. 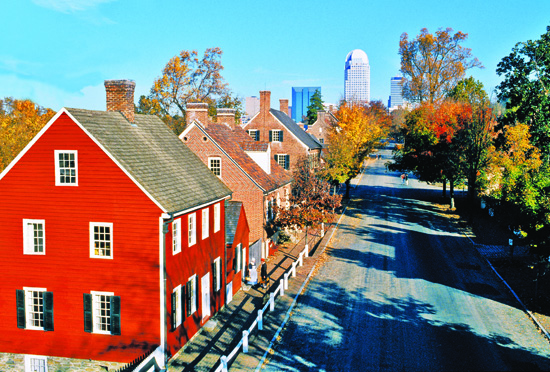 The Moravians who settled in North Carolina traced their faith to the Bohemian priest John Hus, who was burned at the stake in 1415 in present-day Germany for challenging the authorities and principles of the Catholic Church. His followers formed the Unitas Fratrum, or Unity of the Brethren, which spread throughout Bohemia, Moravia—hence the name “Moravians”—and Poland. From there, missionaries headed to Germany and then settled in Pennsylvania before pushing south to North Carolina.

Several Moravian communities were established in North Carolina including Bethabara (1753); Bethania (1759); Salem (1766); Friedberg (1773); Friedland (1780); and Hope (1780); Winston-Salem was formed in 1913 when Salem was consolidated with Winston, an adjacent town established in 1849 and named for a local Revolutionary War hero. In these communities, the Moravians practiced, just as they still do today, a religion based on peace and devotion to the common good.

Along with their beliefs, the Moravians brought unique traditions, skills, and recipes to North Carolina. Visitors to Winston-Salem can learn about Moravian life at attractions like Historic Bethabara Park, Historic Bethania, and Old Salem Museums & Gardens. Even better? You can get a taste of Moravian history by indulging in one—or all—of the following traditional Moravian foods: 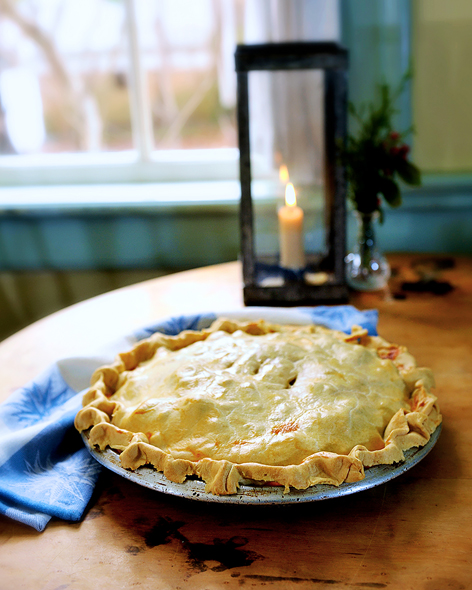 Moravian Chicken Pie
Moravian chicken pie has a double crust and is completely void of vegetables. It is not a pot pie! The epitome of comfort food, the pie’s flaky crust comprises chicken, chicken broth, flour, butter, salt, and pepper. When served at restaurants, a slice of Moravian chicken pie is most often topped with chicken or sage gravy and accompanied by mashed potatoes.

In 1907, a Moravian ladies’ group organized a “Pie Bazaar” in Winston-Salem. According to a local newspaper, the fundraiser provided the “opportunity of one’s life.” Not only would attendees have “fun,” but they would also “get their fill of pie.” It is no surprise that chicken pie was the first to be listed among the group’s various offerings. The event was a “financial success,” as are the many Moravian chicken pie fundraisers still held today.

Where to try it: The Tavern in Old Salem (map) is the spot for this. Built in 1816, the Tavern transports guests back in time by way of Moravian-inspired food, furnishings, and costumed waitstaff (which shouldn’t alarm you—this place is as cherished by locals as it is out-of-towners!). Its Moravian chicken pie, always perfectly baked, is served with mashed red-skinned potatoes, green beans, and chicken gravy. A complimentary basket of yeast rolls and pumpkin muffins also accompanies the meal.

You can find Moravian chicken pie on the menus of other restaurants around Winston-Salem, too, including the more modern-feeling Hutch and Harris (map), located downtown. 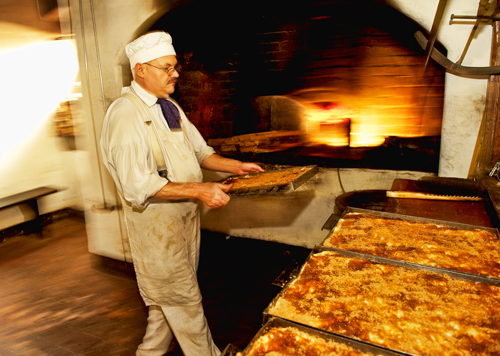 Moravian Sugar Cake
Moravian sugar cake is likely the most popular baked item in Winston-Salem. Made of yeast-raised dough and mashed potatoes, the batter is pressed into a square pan and left to rise. Once it has risen, holes are poked throughout, and a melted concoction of butter, brown sugar, and cinnamon is poured over the top. The end result is a moist cake with pockets of crunchy, melt-in-your-mouth goodness.

Aficionados of Moravian sugar cake are selective in their purchase, as they look for a square with large holes or indentations. It’s a search that’s persisted for more than 200 years. According to the Visit Winston-Salem website, “Moravian men sought out their women partially based on the size of their thumbs. The bigger the thumb, the more gooey goodness ….” True story!

Where to try it: Built in 1800, locally beloved Winkler Bakery (map) remained in operation until 1926, and then it was restored in 1968 as part of Old Salem Museums & Gardens. Inside the bakery, costumed interpreters prepare and sell a number of baked goods. Moravian sugar cake, cookies, and breads are just a few of their offerings. The massive domed wood-fired oven is an impressive sight to behold, as are the many trays of goodies pulled out of it. Although it’s part of the museum complex, you don’t need a ticket to enter the bakery.

Another good option for this is Dewey’s Bakery (map), founded in 1930 by Dewey G. Wilkerson. At two locations in town, Dewey’scontinues to sell “treasured Moravian baked goods.” During the Christmas season, a number of (additional) temporary locations pop up to meet the demand for Moravian food items. Besides traditional Moravian sugar cake, Dewey’s Bakery even has created a unique Moravian sugar cake-flavored ice cream! 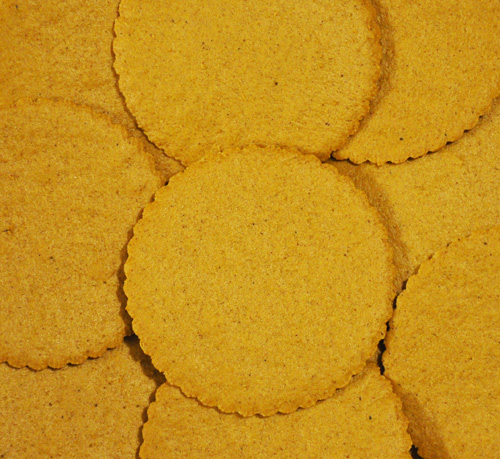 Moravian Ginger Cookies
Moravian ginger cookies are made of molasses, brown sugar, cloves, ginger, and cinnamon. The dough is stored in a cool place overnight—or longer—to ensure the various spices are absorbed.

Rolled out paper-thin and cut into various shapes, these crispy cookies deliver an intense spicy taste that is loved the world over. 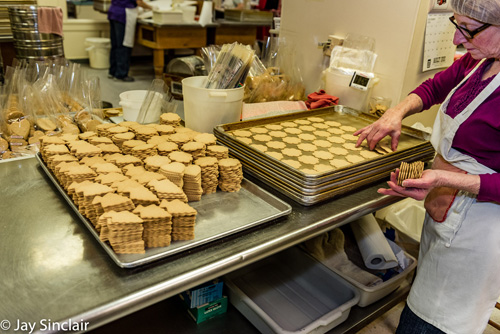 Where to try it: Moravian ginger cookies can be found at the previously mentioned Winkler Bakery in Old Salem, as well as in the Old Salem Visitor Center. They can also be purchased at Dewey’s Bakery and specialty gift shops. At Mrs. Hanes’ Moravian Cookies (map) in Clemmons, about 20 minutes by car from Winston-Salem, visitors can observe cookies being hand-rolled and cut. 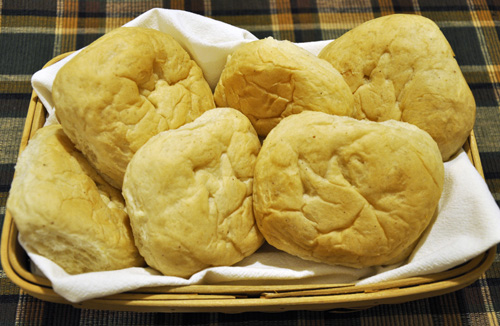 Moravian Lovefeast Buns
Lovefeast services are a tradition in the Moravian Church. During this service, the congregation sings hymns while deiners—a German word that means servant—distribute a simple meal of lovefeast buns and coffee. Once everyone has received their meal, a blessing is given, music is played and a short message is delivered. Lovefeast services are held on Good Friday, Christmas Eve, and other dates significant to the church.

A lovefeast bun could easily be mistaken for a hamburger bun, as it is the same shape and size.

One bite, however, declares otherwise. Lovefeast buns are subtly sweet thanks to the addition of nutmeg, lemon juice, and orange juice, and have an appealing aroma. They make for an interesting alternative for sandwiches.

Where to try it: These buns can be purchased year-round from both Winkler Bakery and Dewey’s Bakery.

Good to know: Should your upcoming travel plans not include Winston-Salem, the above-mentioned bakeries are happy to ship their products!

About the author: Jennifer Bean Bower is an award-winning author and a native of Winston-Salem, North Carolina.