Our friends at Eat Mexico tell us why the Merced Market is a Mexico City must-see. 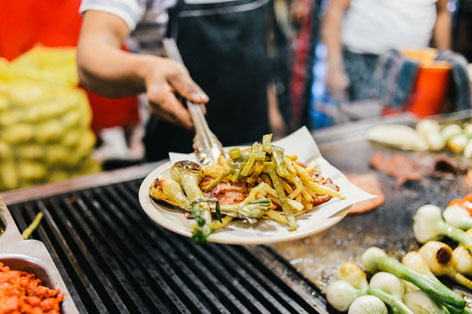 Forget what you may have heard about the Merced Market, in Mexico City. In my opinion there is only one real danger: You will, inevitably, time and time again, come home with bags full to overflowing with unnecessary items that you found impossible to resist. Personally, I have at various times and with varying degrees of regret purchased 3 kilos of sliced nopal cactus, a frog tamal, a bag of violet-colored beans from Puebla, a dozen mini tlacoyos that fit in the palm of my hand, and a set of white porcelain espresso cups—and I don’t even own an espresso maker. Each purchase was made in the passionate fervor that for me accompanies shopping the aisles of La Merced, one of D.F.’s oldest and grandest city markets.

At the time when Eat Mexico started developing its Merced tour, I had taken only one trip to this congested area east of the Zócalo, and had walked through just one building of its teeming market. I’d been roaming the streets with a local Merced resident, researching for a piece I wanted to write about the neighborhood. When we reached the market’s meat and cheese building, she told me to put away my fancy camera and voice recorder. She was at ease, but alert. I followed her lead. 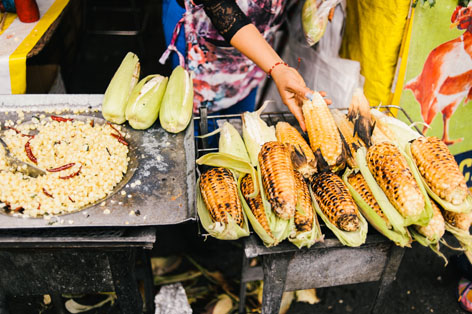 I remember being overwhelmed and simultaneously captured by the ubiquitous noise and chaos. The scent of browning onions and roasting meat hits you immediately, followed by burned corn husks and the spray of freshly squeezed oranges. It’s the kind of wild, colorful place that appeals to only true travelers—a place stripped of pretension and niceties where you can lose yourself for hours in miles of wonders, with everything at your fingertips, everything for sale.

An insider’s tour of the market was a no-brainer, especially given the countless travelers who had already expressed interest. In designing this tour, Eat Mexico leaned heavily on the advice of our local guide, Ubish “Arturo” Yaren, who has lived near the market most of his life. 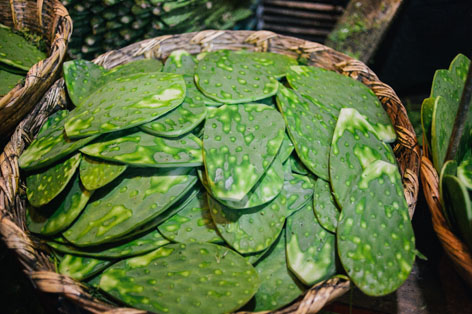 The first few planning trips for me were a maze of Christmas lights, severed pig heads, mounds of drying chilies and the pungent smell of nopal, as vendors scraped the thorns from the cactus’s flesh and called out “Que le damos?” I got lost, many times, but despite my initial trepidation, nothing malevolent ever happened.

The Merced, its market and the neighborhood itself, is an integral part of the story of modern-day Mexico City. The neighborhood (and in particular one ancient stone bridge in the middle of it) was originally a destination for vendors from Xochimilco, the city’s old agricultural center, who transported their produce, by canal, into the heart of the ancient Aztec Tenochtitlán, now Mexico City. It housed some of the city’s first granaries and warehouses and, before the Merced market, was home to other food and commerce markets. Its streets have historically served as a landing place for immigrants of all stripes—those escaping civil war, the Inquisition, and rural poverty; those looking to make their fortunes or forget their troubles. Prostitution has long been woven into the fabric of the Merced, and is still visible each day as women line the busy avenue in front of the market. 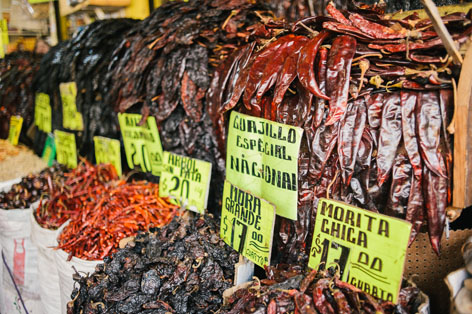 Merced Market’s main fruit and vegetable building, known as the nave central, is the size of four football fields; it comprises several city blocks and is home to multi-generational families of vendors, folks who started selling in the Merced when it was still an open-air market with goods sold on blankets under the mild valley sunshine. These vendors have survived economic downturn, multiple fires, and the shifting sands of Mexico City politics only to return, again and again, to sell in La Merced.

More than simply corridors of history, the Merced Market is a center of commerce that, from the moment it opens in the morning to when its stalls close at night, bustles with the buying and selling of thousands of products necessary for life in Mexico: 50 kilos of serrano chilies, 5 kilos of roasted crickets, 20 kilos of wild mushrooms; every variation of what Mexicans lovingly call vitamin T (tacos, tlacoyos, tlayudas, tortillas, and tamales); and a rainbow of chilies in every shape and size imaginable. 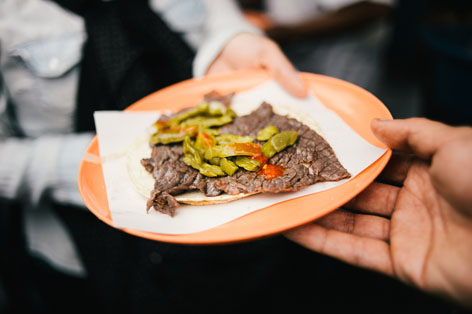 The four hours or so that we spend in La Merced on the Eat Mexico tour could never cover everything—you’d need at least a week for that—but it does give visitors a taste of what this incredible place has to offer. Whether you leave with a brand-new comal or the aftertaste of a gamey gordita de chicharrón on your tongue, the Merced will reveal its delicious bounty on each visit—tour or no tour—and you will be glad you came.

About the author: Lydia Carey manages Eat Mexico culinary tours as well as working as a freelance writer and translator in her adoptive hometown, Mexico City. You can find her online at her blog, MexicoCityStreets.com.