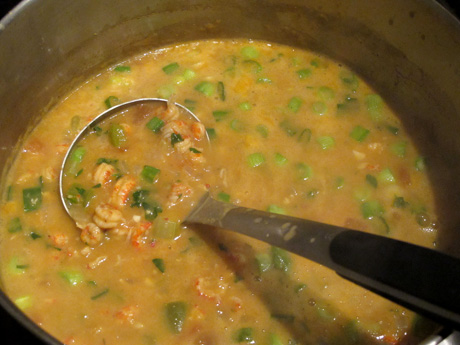 In this new EYW Blog series, our writers will feature recipes of dishes they’ve encountered while away and re-created at home.

A few gluttonous days in New Orleans are hard to beat, but while you can’t bring home the city’s soulful live music or lighthearted survivor spirit, you can at least attempt to make some of its classic foods in the daiquiri-free confines of your own kitchen. After my last trip to NOLA, I spent a week back in New York dreaming about beignets and BBQ shrimp before my husband and I got our acts together, invited some friends over, and set up a Sazerac bar. We were having a NOLA dinner party, damn it!

My mind wandered to what’s quick and delicious, and landed on the simple yet memorable crawfish étouffée—the version we ate at dive bar Coop’s Place [pictured below] on our last day in New Orleans was one of our favorite meals of the trip. For this traditional Cajun dish, crawfish tail meat is “smothered” in a rich, spicy brown stew of vegetables, butter, and Cajun spices, then served over rice. It struck us as the perfect main course for a party of 10—more unusual than other New Orleans classics, like gumbo or jambalaya, but still relatively easy to make. 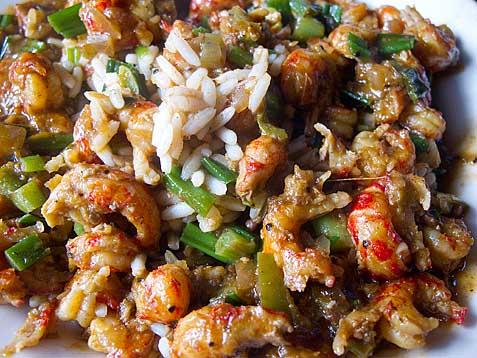 Inside Manhattan’s Chelsea Market, I tracked down some crawfish as well as two Louisiana sausages, smoky andouille and earthy boudin blanc (pork with liver and often heart, plus rice). Unfortunately, the crawfish was frozen and from Spain, but it’d do the trick (shrimp can also be substituted).

I used an étouffée recipe from famed New Orleans chef, Emeril Lagasse. Specifically, it was the recipe Emeril demonstrated on The Martha Stewart Show—and I must admit, the visual (video) aid actually came in handy. I’ve edited the recipe below just slightly to better reflect what is shown in the video. Note that while it is traditionally Cajun, crawfish étouffée is popular in Creole cooking as well; the inclusion of tomatoes in the recipe I used makes it more a Creole version.

Because we had a large group—and everyone likes to eat a lot—we doubled this recipe with no problems (two pounds of crawfish still sufficed). It turned out so delicious we had very little left over.

During the party, we served the grilled andouille and boudin sausages—you steam the latter for about 10-15 minutes, then remove the thin casing and squeeze some lemon on it—with spicy Creole mustard and French bread as scene-setting appetizers, alongside a centerpiece fashioned from Mardi Gras beads and a souvenir voodoo doll (couldn’t resist). And to drink? It can only be Sazeracs—a little Herbsaint or absinthe to coat the glass, Peychaud’s bitters, rye whiskey, simple syrup, lemon peel (recipe here). Our group found them exceedingly easy to drink.

2 lbs crawfish tails, with the fat (or substitute shrimp, if you must)

2 tsp Emeril’s Original Essence (or make your own)

1. In a large, heavy saucepan, melt 4 Tbsp of butter over medium heat. Make a roux by adding the flour slowly and whisking to combine. Continue to cook, stirring constantly, until roux is the color of peanut butter. (Do this for a good couple of minutes, being careful not to burn the butter.)

3. In a medium bowl, toss together crawfish tails (and any crawfish fat) and the Essence, and add to the simmering sauce along with the lemon juice, scallions, and parsley. Cook, stirring occasionally, for 15 minutes. Add remaining 2 Tbsp butter; stir to combine. Serve over rice.

A version of this article originally appeared on Foodists.ca.