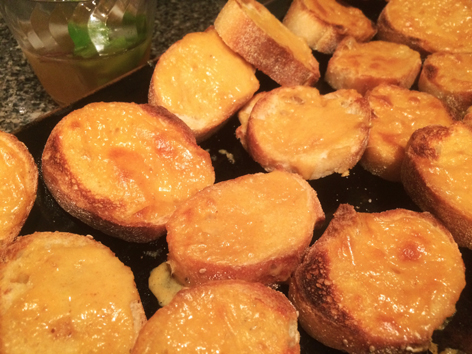 A few months ago in Louisville, Kentucky, we went hunting for beer cheese. Much in the vein of England's Welsh rarebit, this state specialty combines cheese with beer and spices in a dip of sorts and serves it, traditionally, with crackers. It turned out beer cheese wasn't terribly hard to find in Louisville; brewpubs served it with pretzels and even the farmers market had a stand selling the stuff. But it wasn't until we went to Eiderdown, a restaurant in Germantown, late one afternoon, that we really got the appeal of the stuff.

A local guy—whose apartment we were renting via Airbnb—told us Eiderdown had "perfected the perfect beer cheese," so we packed up our one-year-old and drove the 10 minutes southeast of downtown to Germantown. It was our fourth day in town, we were tired, and here I was making us try yet another beer cheese, convinced by our host's recommendation that we hadn't yet had a great one. Immediately, we saw we'd made the right move: Unlike the previous cold, harder varieties we'd tasted, this one came to the table warm, paired with a thin-sliced baguette baked at a local cafe. Unbelievably creamy, with a pleasant savory bite, the bowl before us didn't stand a chance. We polished it and our excellent local beers off before our kid could even think of getting antsy.

I haven't thought much about that beer cheese in the ensuing months [our Louisville food guide is forthcoming, this winter], until I was casting around for a food pairing with a bourbon cocktail this weekend. A few neighbors in our co-op building in Queens were getting together for a second self-styled "cocktail crawl"—one cocktail and snack in six apartments—and Scott and I were, as usual, claiming bourbon as our spirit (we went with a pitcher of Gold Rush). I remembered the beer cheese and found a recipe I thought sounded like the one we had loved in Louisville: served warm, not as a dip but spread onto sliced baguette. I was slightly nervous that it would be too sharp, too bite-y, for our friends, but I needn't have worried: The entire bowl of beer cheese disappeared amid requests for recipes. Here's the one I used:


*We used about 8 oz each of white and yellow sharp cheddar; include at least one good-quality brand!
**I've seen recipes that advise a cheap beer for this, but it didn't seem right to use the completely flavorless Coors Light someone left in our fridge six months ago. We used Blue Point Winter Ale instead.

1. Using a food processor or hand blender, combine the first seven ingredients and blend until smooth. Season with salt. Ideally the beer cheese rests overnight; there are countless recipes for the stuff, but everyone seems to agree the flavors improve with time.

2. Before serving: Preheat the broiler. Spread the baguette slices with beer cheese and arrange on a baking sheet. Broil the toasts for 2-3 minutes, until the cheese bubbles and is browned around the edges. Serve immediately...with bourbon or beer!

We also reserved some of the cold beer cheese and served it with crackers. Warming the cheese and putting it on bread mellows the flavors a bit, so it's nice to let others try it bold and cold as well.