Ever consider traveling to Sierra Leone? Maybe you should. 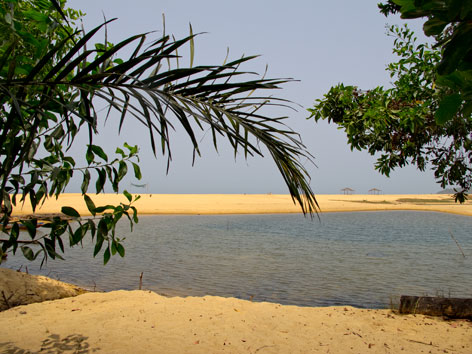 Somewhere between waking up to peaceful lagoon views; swimming in a warm, empty sea before breakfast; and feasting on spicy pumpkin stew at lunch, I started to wonder: Why isn’t this place swarmed with tourists?

I could guess the answer—this was Sierra Leone, the tiny corner of West Africa best known for an ugly slavery history, a decade-long civil war (1991-2002), and the violent thriller Blood Diamond—but it still didn’t make sense. As I surveyed pristine John Obey beach, where Scott and I stayed our first few nights at eco-tourism venture Tribewanted, the word “paradise” easily sprung to mind. 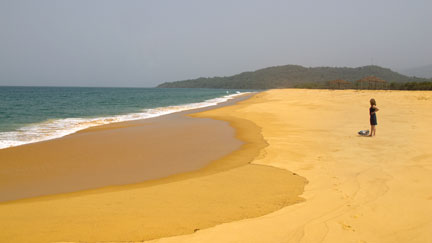 Note to the National Tourist Board: If you’d like to make a good first impression on all future visitors to Sierra Leone, send them directly to Tribewanted. Created by Brit Ben Keene and Italian Filippo Bozotti in 2010, after Keene founded the concept on a Fijian island in 2006, the Sierra Leonean initiative takes the community-based tourism model—in which the community, a fishing village in this case, has a stake and sees real benefits—makes it sustainable (using solar power, organic gardens, compost toilets, bucket showers, local building materials, etc.) and throws in a cross-cultural twist: Why not have visitors and villagers live together, and learn from one another? Guests have the option of volunteering any skill they have, or not: The founders also took care to select a village situated on a vacation-ready strip of spectacular coastline, backed by jungly hills. 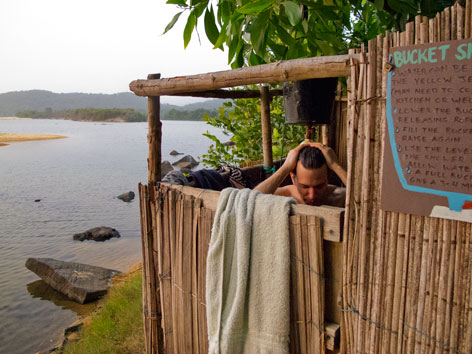 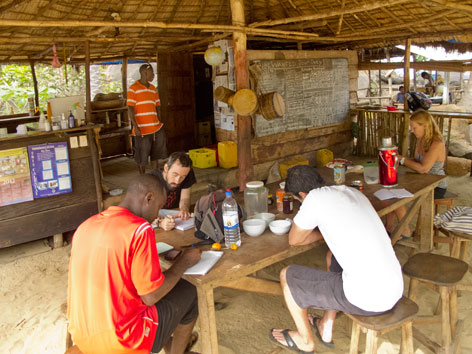 Our six days at Tribewanted, then, were filled with swimming and playing with the village boys, reading in hammocks and chatting around the communal kitchen table, hiking forests and endless stretches of vacant beach. We studied the local cuisine, of course, visiting the chaotic local market, foraging for edible fruits, and cooking with the kitchen staff, and were helped immensely by the fact that Tribewanted serves Sierra Leonean dishes every day for lunch—spicy, hearty food that always includes a generous heap of tasty, locally harvested country rice. Each night after copious amounts of local seafood and poyo (palm wine), we found our cozy bungalow via headlamp, fell asleep to a chorus of frog calls and the crashing of waves, and awoke to birdsong and, well, the crashing of waves. 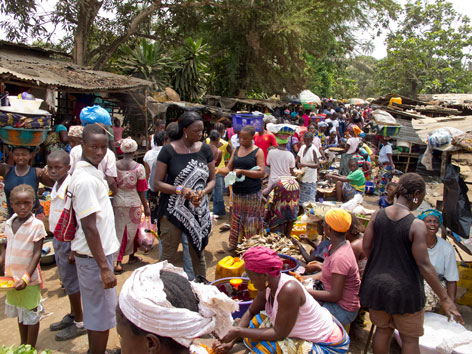 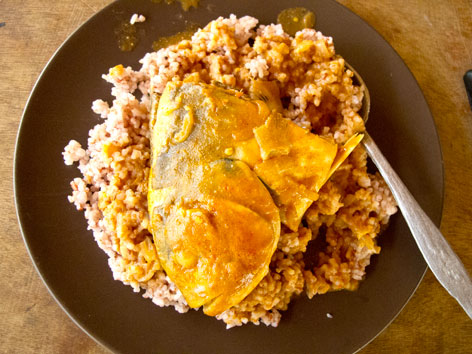 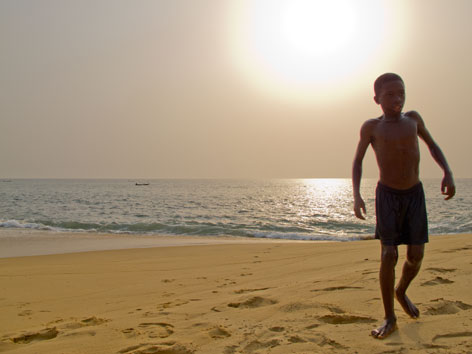 It was idyllic. We could have left, quite satisfied, after a few days at Tribewanted, but we itched to see more of the country. Armed with a 4x4, a driver, and guide/fixer named Sergeant Bull, we drove to dusty inland cities Kenema and Bo—and through their diamond-mine-pockmarked surrounds—to soak up their distinctly relaxed energy, staying in rundown, generator-powered hotels and going out dancing and drinking at night. We ensconced ourselves back in nature, under a tent on stunning Tiwai Island—a tropical wildlife sanctuary and solar-powered community conservation program in the tranquil Moa River—where we hiked amid primates between local meals meticulously prepared by the resourceful village chef. We haggled for blankets and gawked at the overcrowded streets and elegantly dilapidated colonial architecture in Freetown, the mountain-backed capital city so named for the liberated slaves brought to settle there in 1787. 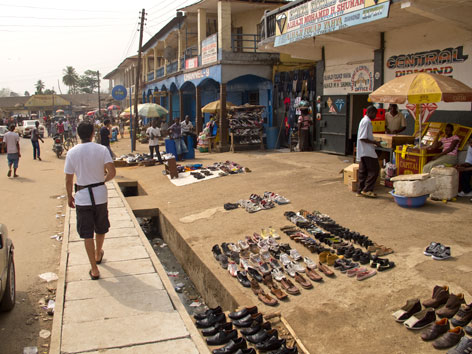 Bo Town, where the streets are lined with diamond shops 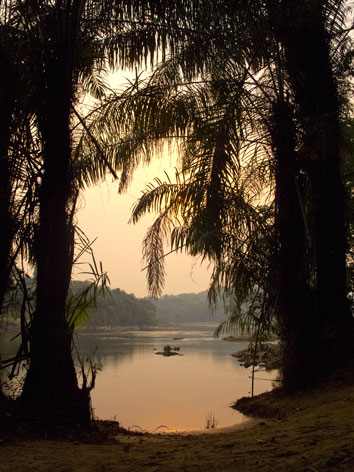 Sierra Leone, it turns out, is an exceedingly rewarding place to visit, full of discovery and unexpected charm. But while we met countless inspiring people living and/or working there—a freelance tour guide turned community activist, a U.S.-educated lawyer working to untangle her country’s judicial system, Australians building orphanages, Brits running a kids’ football academy—travelers were scarce. In fact, in our 12 days we encountered just five others who were there for the sake of travel, and only one of them came from outside Africa. What gives? 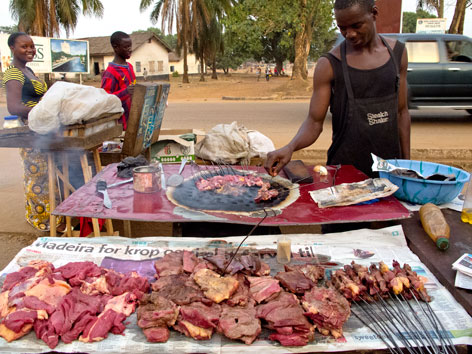 There are a few obvious explanations. It’s expensive, between the airfare, visa, yellow-fever vaccination (a requirement), and sky-high gas prices. There are lingering notions of Sierra Leone being unsafe or unstable (it’s neither). There’s not much infrastructure for tourism, nor regulation of things like cutting down trees (unfortunately, there’s startlingly little forest left to protect). And for a country on the bottom rung of the U.N. Human Development Index, with a life expectancy just shy of 48 years, there are plenty more pressing challenges in the way. Boku, as the Krio-English-speaking Sierra Leoneans would say. 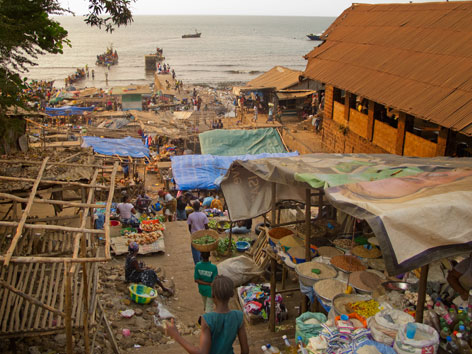 But for the adventurous and outdoors-loving traveler, Sierra Leone should most definitely be on the radar, as should those smart, forward-thinking tourism initiatives we came across—Tribewanted, Tiwai Island, the handful of other community-based ventures we saw along the Freetown Peninsula. They make the most of the country’s natural beauty and cultural heritage while taking measures to protect them. They employ and educate the local population and see that they benefit from sharing their land with visitors. Even as mass-market hotels and big beach resorts break ground nearby, these small ventures inspired us to rethink what travel in developing countries should look like—and gave us hope that sustainable, community-based tourism just might be where Sierra Leone is headed. 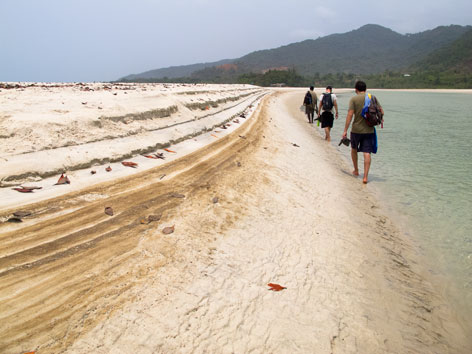 Editor’s Note: This is the first of a series of posts on Sierra Leone. Stay tuned for more, including detailed coverage of 13 traditional Sierra Leonean dishes. We'll leave you for now with the giddy farewell we received from some kids when we stopped to change a flat tire on the Bo-Kenema road (it seems we interrupted their dance party). Go ahead and watch: We dare you not to smile.