You Must Eat Surinamese Food in Amsterdam—Here's Why (& Where) 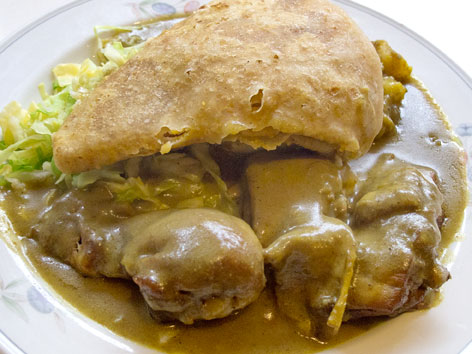 We are kind of obsessed with Suriname and its multicultural cuisine. Where else do Dutch, Indonesian, Indian, Chinese, African, and Caribbean influences mix and mingle so freely? From what we’ve heard, anyway: We have not actually been to Suriname. Yet.

But we have been to Amsterdam, and great Surinamese food abounds there. You see, tiny Suriname, located on the northern coast of South America, is a former Dutch colony. When Suriname was granted independence in 1975, its people were given the choice of Surinamese or Dutch citizenship, and nearly half of the population at that time opted to migrate to the Netherlands, bringing their intriguing cuisine with them.

(Holland is, it might be noted, at least partly responsible for the diversity in Suriname’s food: Once the Dutch finally abolished African slavery in the 19th century, they brought over laborers from Indonesia, India, and China to work on plantations there—and those workers, in turn, brought their own food traditions, adapting them with Surinamese ingredients, such as tropical fruits, seafood, cassava, malanga, plantains, and more.)

So sampling Surinamese food was right up there with Indonesian rijsttafel and classic Dutch appeltaart when we were in Amsterdam. We’d heard the cluster of Surinamese spots located near Albert Cuypmarket in the De Pijp neighborhood was a good bet, so we headed to Albina (Albert Cuypstraat 69, map), an inexpensive, no-frills restaurant with a vast menu reflecting the cuisine’s mashup of influences. (Officially, it’s a Surinamese-Chinese restaurant.) Pictured at top is the Indian-inflected roti kippenbout, pairing the large, flaky, buttery flatbread with a spicy, flavorful chicken-drumstick curry studded with potato, vegetables, and hard-boiled egg. Absolutely delicious. But the options are endless, even overwhelming here: Consider a traditional moksi meti (roasted pork and chicken stewed with kousenband, or green beans), which you can have with white rice, Chinese-style chow mein (tjauw min), Indonesian-style stir-fried noodles (bami goreng), or Indonesian fried rice (nasi goreng). Try the plantain fritters (baka bana), with or without peanut sauce; the Hindustani doughnuts called bara; or bojo, a cake made of cassava, coconut, and raisins. 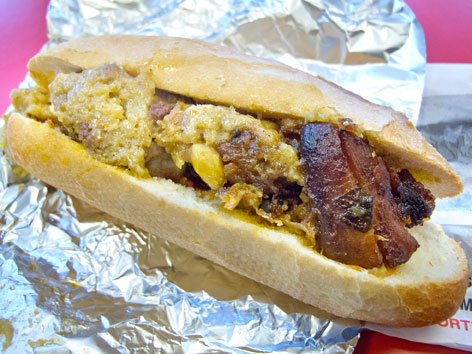 Albina is also a good place to try broodje pom—the most Surinamese of Dutch broodjes, or sandwiches—but we had a memorable one at De Tokoman (Waterlooplein 327, map). For this creamy, tastebud-awakening affair, chicken and baked malanga (a starchy, taro-like root vegetable) are mashed into a typically delicious Dutch bread roll with zuur, a tangy-spicy pickled cabbage-onion relish, and peper, a hot pepper sauce. It’s a tart, spicy, unexpected pleasure to eat—and an Amsterdam must.

Other great options for Surinamese food in Amsterdam include Lalla Rookh (Wijttenbachstraat 290, map), a popular spot near Oosterpark in the east of town that’s particularly famous for its roti, and Riaz (Bilderdijkstraat 193, map) in Oud-West, in business for 30-plus years and celebrated for such traditional favorites as pindasoep (spicy peanut soup) and her heri, a stew of cassava, sweet potato, plantain, and salted cod. Sounds more exciting than your usual bitterballen, doesn’t it? (OK, we love that stuff too.)

Anybody have a favorite Surinamese dish or restaurant (in Amsterdam or elsewhere) to share?