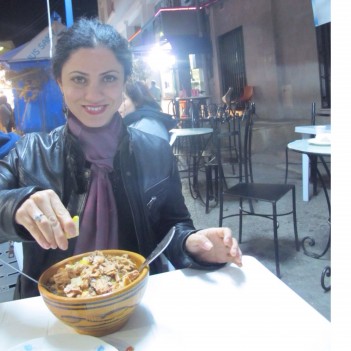 Leblebi means different things in different countries and languages around the Mediterranean. But in Tunisia it means only one thing: Yum! Leblebi in this North African nation of 11 million is a thick soup consisting of bread chunks, chick peas, water, and fresh tuna, all spiced with Harissa, seasoned with black pepper, and topped with fresh-squeezed lemon. Here the Tunisian diva Emel Mathlouthi satisfies her longing for this traditional dish on a visit back home from Paris, where she resides. A fan spotted her in line and expressed surprise that the star would eat such pedestrian fare. "Are you kidding," she asked. "I wouldn't miss it for the world!" Follow leblebi everywhere in Tunis, and Emel Mathlouthi on Facebook.com/E.Mathlouthi