<< back to foods in Udaipur 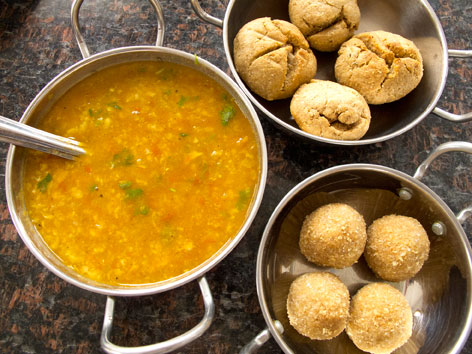 What: Among the most traditional of Rajasthani dishes is dal-baati-chorma (also spelled daal, bati, churma), a vegetarian favorite with three important components: the dal, or cooked spiced lentils, you’re likely familiar with; the baati are baked, unleavened whole-wheat dumplings, salted and brushed with ghee (intended to be eaten with the dal); and the chorma is dessert—whole-wheat balls traditionally made from unsalted baati that are deep-fried, mashed, and then mixed with ghee and sugar (and sometimes dried fruits and nuts).

The dish’s evolution in Mewar culture likely came about thanks to the long shelf life of the simple, nutritious baati—a hardy food for the hardy nomadic tribes of arid Rajasthan. Today it’s a beloved local staple and a constant presence at festivals and weddings. Interesting to make and even better to eat, the filling, wholesome trio is a must when in Rajasthan.

Where: Our DBC came from the Hotel Krishna Niwas (34-35 Lal Ghat, below Jagdish Temple), a friendly place to stay that happens to be co-owned by a great local cook: Sushma Khatri. Although the hotel has a rooftop seating area and a small menu, it doesn’t really have an official restaurant, but Sushma takes requests (in addition to offering great cooking classes on pretty much anything you’d like to learn in Indian cuisine). We didn’t take a formal class on making DBC, but she made it for us for a fee, and allowed us to watch its preparation (we were charged extra for this, about 350 rupees per person in total).

When: Guest or not, pop into the hotel during the day and ask Sushma if you can arrange either a DBC meal or cooking class.

Order: This dal-baati-chorma was beautifully executed. The dal, cooked with onion, garlic, ginger, chilies, tomato puree, and a host of spices (including fresh coriander, or cilantro), was bright, creamy, and flavorful. The thick baati, grilled till browned and cracked, tasted of nutritious wheat and caraway seeds. You can dip the baati into the dal, but our hosts advised us to break off and crumble up a bit of baati, and then spoon some dal on top. A squirt of lemon or some extra ghee isn’t uncommon.

The third piece of the equation—the sugary, buttery sweet chorma—resembled doughnut holes, but with a soft, sandy texture. A decadent close to a delicious meal.

Alternatively: You can certainly find this dish cheaper out on the streets, though we can’t personally vouch for its quality elsewhere. Based on the recommendation of a cab driver, we were about to head out to Santosh Dal-Bati (94138-11565, 0294-2412377, at Suraj Pole, approx. map) when Sushma volunteered to cook it for us herself. The Santosh suggestion is echoed on the helpful India Mike forums, so we assume it’s a good bet.