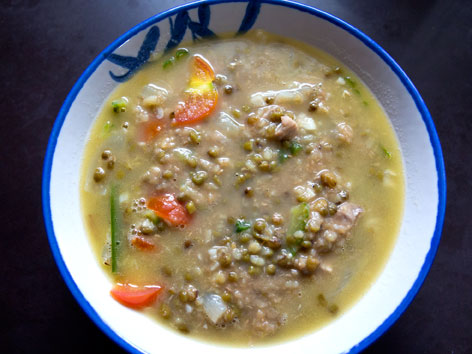 What: In Cebu, green mung beans are called munggos (“moong-goss”), but the name more commonly refers to the savory soup that uses green mung beans. Regional variations exist throughout the Philippines (where the beans/soup might be called monggo or balatong), but in Cebu, munggo the soup is usually mung beans, garlic, and onions sautéed in lard or with bits of pork, salt, and greens—traditionally kamunggay, or moringa, leaves. Munggo is a Cebuano staple in homes, roadside eateries, and local restaurants alike. It’s simple fare, but nutritious and filling, which makes it a great companion for dry sud-an (savory dishes) like grilled fish or even battered, fried chicken.

When: Daily, 11am-2pm and 6pm-1am. Takeout and delivery is available.

Order: Alejandro’s munggo (Php 135) was delicious, with lots of chopped garlic, onions, and tomatoes forming its sautéed base. Spring onions added a fresh dimension, standing in for the kamunggay leaves that many homemade munggo soups use. The flavor is altogether earthy, salty, and belly warming. Although perfectly edible on its own, munggo is usually a “companion” soup for fried or grilled favorites, so we decided to pair it with some crispy pata (pork leg). Turns out, Alejandro’s claim for having the best in town was justified—its pata was temptingly crisp on the outside and moist on the inside, with none of the greasiness you might expect. Other must-tries here are the battered chicken and crispy, deep-fried tilapia.

Alternatively: Turtle’s Nest (Gorordo Avenue, map) is a café and drinking den popular with student, artist, and backpacker types. It serves munggo (with kamunggay leaves) daily, and is also the home of World Munggo Day, a fun costume-and-music affair held around the second week of December for which participants are encouraged to bring and share their munggo concoctions.