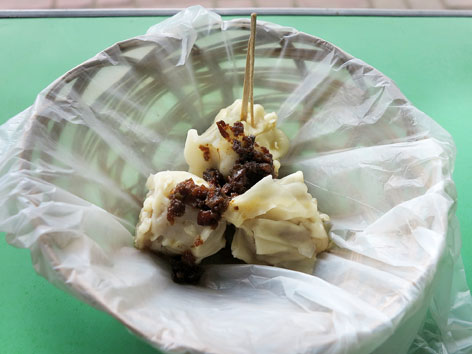 Siomai (“sho-my”) in the Philippines are steamed Chinese pork dumplings, and one of the few food items that’s retained its Cantonese name (alternative spellings include shumai, siumai, or shaomai) since arriving here. On Cebu, they have become the specialty of a city district called Tisa, where a siomai fad some 10 years ago had people flocking there to eat the dumplings at roadside eateries. Thus, siomai sa Tisa originally referred to eating siomai at Tisa.

Though no one can recall who started the Tisa trend, siomai sa tisa has since evolved into the Cebu standard for street-style pork dumplings. These are no-frills siomai, consisting simply of chopped pork, salt, and some secret flavoring and spices encased and steamed in a dumpling wrapper—no shrimp, no mushrooms, no vegetables. They’re accompanied by limonsito or vinegar, soy sauce, and a chile-garlic oil that only makes you want more siomai—and, at dirt-cheap street-food prices, you might as well eat a lot of them.

Where: A humble chain called D’Original Siomai sa Tisa claims to sell the original siomai sa Tisa in more accessible locations (i.e., outside of Tisa). The one we found was a hole-in-the-wall in a popular row of holes-in-the-wall at the intersection of Salinas Drive and Archbishop Reyes Avenue (map).

When: This is virtually a 24-hours joint, since it’s part of the main row of eateries servicing Cebu I.T. Park, where a high concentration of 24-hour call-center offices operate.

Order: The siomai run Php 7 a pop (that’s US$0.15 last time we checked). We ordered three pieces and a small bottle of Sparkle, a sweet, lemon-flavored carbonated soda that’s popular at these types of eateries. These siomai are not your delicate, Hong Kong-style dim sum served in a bamboo steamer basket. They are mass-produced pork dumplings, steamed by the hundreds in large, double-deck aluminum steamers for mass consumption. They arrived on a small woven bowl covered in a disposable plastic bag, already slathered with brown chile-garlic oil and waiting to be seasoned further with the soy sauce and vinegar (disguised here in a two-liter bottle of Coke).

We can only describe the flavors as a riot in your mouth, with the siomai providing the perfect meaty, starchy base for the spicy-salty-sour combination of sauces. We noted our neighboring diners preferred theirs with a couple of puso and a side order of fried lumpia (spring rolls).

Alternatively: You can look out for ambulant siomai vendors on modified tricycles, though they don’t claim to be from Tisa. They tend to show up near schools and construction sites in time for merienda (afternoon snacks, around mid to late afternoon). Dim sum cart franchises are also popular around the metro, and you’re sure to find two or three brands (like Cebu-based Dimsum Break) at any shopping-mall food court. If you want the real real deal, you might consider taking a taxi to Tisa (map), where Cebu’s love affair with siomai blossomed.

Good to know: Not all siomai are created equal. We had one disappointing experience at a simple, randomly chosen Chinese restaurant, where the siomai served were small, shriveled morsels with tough dumpling skins—clearly cooked ages ago to the point of drying out. You gotta respect the mobile vendors and hole-in-the-wall joints that serve tasty, freshly steamed siomai.