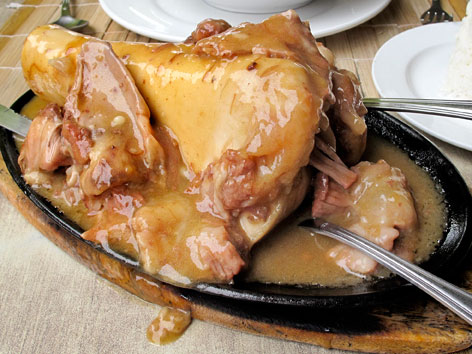 What: Sizzling pochero (“poh-cheh-roh”) in Cebu is a humongous chunk of beef joint/shank with marrow taken from pochero, a common Philippine stew of meat and vegetables. Take away the veggies and the broth, douse the meat in gravy, place it on a hot sizzling plate, and you’ve got Cebuano sizzling pochero. The flavor of the beef comes from stewing it for hours as pochero, with salt, peppercorns, and onion, until the meat is fall-off-the-bone tender; corn on the cob, shredded cabbage, and bamboo shoots are added just before it’s served. Some call it cholesterol on a platter. We call it delicious.

Good to know: While many claim that Cebu’s pochero is the Cebuano interpretation of the Tagalog’s bulalo, a clear beef marrow soup, this dish will be recognized in Spanish-speaking countries like Mexico, Argentina, Colombia, and Paraguay as puchero, which translates to stewpot. Ingredients vary according to locale, but the common ground is to stew a base of meat and local vegetables. Only in Cebu, however, is the stewed meat served alone on a sizzling platter.

Where: Kusina Uno (032-238-5283; 2F GND Bldg., F. Cabahug St., across from Jetti gas station, map) is the home of sizzling pochero in Cebu. It is staffed by cooks and waiters from the now defunct Abuhan Uno, which invented the dish for local carnivores. Kusina Uno is an al fresco joint with plastic chairs and friendly service—the perfect place to focus on food and nothing else.

When: 24/7. Kusina Uno is the go-to after-hours place following a hard day’s work, or a long night out.

Order: The sizzling pochero will set you back Php425—a princely sum in a city where the minimum daily wage is less than Php350—but it’s easily shareable among two people, or more if you order other dishes (as traditional family-style dining dictates). Before the meat arrives, you’re given little saucers of tiny red chilies and limonsito (a local citrus fruit)—mix these up with the soy and fish sauces on the table to concoct your own unique salty-sour-spicy dipping sauce. The dish is served sans side dishes, so get an order of plain rice—it’s the perfect base for the marrow, meat, gravy, and sauce (we also liked the chop suey, a starchy stir-fry of carrots, sweet peas, cabbage, bell peppers, and bits of pork, chicken gizzard, and chicken liver).

The sizzling pochero is indeed cholesterol heaven, and a tasty one at that. Our only complaint is that the quality of the meat here can vary: Ours was tough in parts and melt-in-your-mouth tender in others. Order something fizzy to cut the grease.

For a fuller understanding of this dish—or if the sizzling version is too caveman-ish for your taste—try the regular pochero here, too. Its comforting broth and bright vegetables will make you feel a little better about eating all that beef shank and marrow.