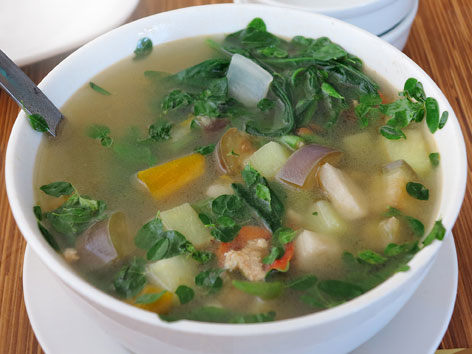 What: Utan bisaya (“ooh-tan bee-sah-ya”), which translates as vegetables Visayan style*, is Cebu’s vegetable soup, generally composed of whatever veggies might be available in the larder or from the back garden. Expect okra, eggplant, snake beans, kamunggay leaves (moringa), alugbati (Malabar nightshade, a leafy green), taro, and squash with some ground pork or dried fish thrown in for flavor. We’ve long wondered how Cebu folk balanced out their meat-heavy meals, and this light, fresh soup is the answer—it’s the perfect foil to the usual fried and pork-heavy dishes so ubiquitous in Cebu.

*Good to know: Visayas is a geographic and ethno-linguistic area in the middle of the Philippine archipelago. Generally speaking, people in Cebu identify as Cebuano first, Visayan/Bisaya second, and Filipino third.

Order: In a restaurant like Chika-an, utan bisaya (Php 135) is a dish to share—the bowl that arrived was enough for four hungry people. The soup accompanied our order of lechon kawali (wok-fried lechon, usually the liempo, or belly, part), buttered garlic shrimp, grilled tuna belly, and steamed rice. The plentiful cubed vegetables—kamunggay, squash, eggplant, taro, snake beans, okra, sayote (chayote, or pear squash)—were just cooked through, and the base flavors (sautéed onions, tomatoes, salt, ground pork) were simple yet tasty. With so many vegetables in one bowl, we congratulated ourselves for eating such a nutritious soup. But, alas, the lechon kawali awaited…