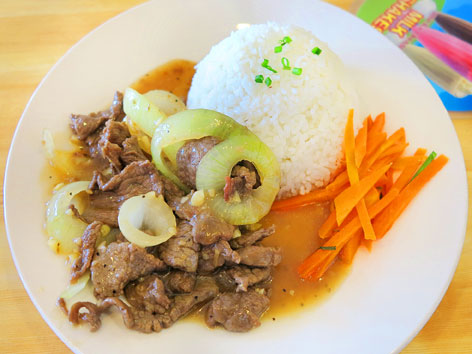 What: Bistek tagalog (“bis-tek tah-gah-log”), a.k.a. beefsteak tagalog, consists of thin slices of beef cooked in soy sauce, kalamansi, garlic, and onions. Steak worshippers might consider slicing good cuts of steak sacrilegious, but anyone who’s been here—or to any other former Spanish colony in South America—will assure you that the saucy, pan-fried goodness of bistek (or bistec, as it is spelled in countries like Cuba) is worth the sacrifice. The beef is marinated in the soy sauce, kalamansi, and garlic before it’s pan-fried, while the onions can be done in various ways: fried separately, caramelized, or cooked in the sauce. The resulting flavor is a pleasing mashup of salty, tangy, and subtly sweet over lots of meat.

Where: Icebergs (632-833-7910; multiple locations including Harbour Square, CCP Complex, Roxas Blvd, Pasay, Metro Manila, map) is a local chain best known for its menu of Filipino and American-style ice desserts. It’s where halo-halo and mais con hielo (corn with ice) rub elbows with ice cream sundaes and banana splits—but it turns out they make a mean bistek tagalog, too.

Order: Icebergs' generously portioned bistek tagalog (Php 228) comes in a peppery sauce with a cup of rice and steamed julienned carrots. The meat was properly tender and tasty due to the soy sauce and kalamansi combo, not at all onion-dominated. It was surprisingly garlicky, but that didn’t stop us from scooping it all up in our spoons, Filipino style.

Alternatively: Goldilocks is a go-to cake-shop chain for birthday cakes, but some of its branches, such as that at the food court of Robinson’s Galleria (Ortigas Ave. corner EDSA, Pasig City, map), serve carinderia-style (cantina or eatery-style) meals, including a homestyle, tangy-salty bistek tagalog, drowned in a brown, soy-sauce-colored sauce that you are meant to drizzle over your fluffy white rice—all for Php 105!