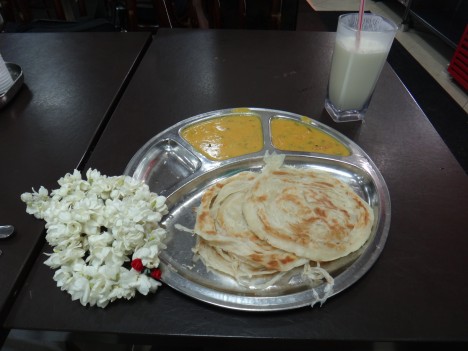 Paratha with vegetable korma, and sweet lassi to accompany. Tasted so exactly like the version served in Tamil Nadu, India, where this dish originates (and where I lived for a few months many years ago) it almost brought tears to my eyes. Burfi and laddoo from the (associated) shop next door were pretty good too.

Ed. note: Hungryel added: "Tamils from South India are one of the three main ethnic groups that make up the population of Singapore (which is, for that reason, considered at least as much a Chinese or Indian city as it is a Malay one, if not more so, despite being not particularly close to either of those countries). South Indian fare is as Singaporean as pizza is American!"