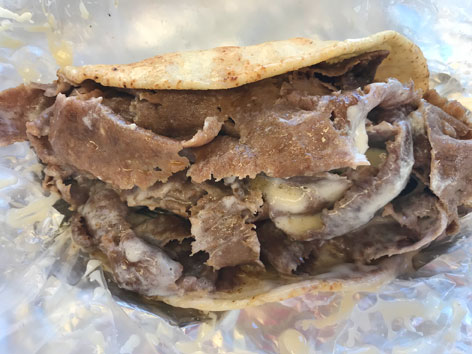 What: The local take on doner kebab (or gyro), Halifax’s donair is probably the most famous of the city’s regional dishes…and it’s a funny one, both familiar and totally different from what you know. Typically a round of pita bread (platters are also available) is loaded up with donair meat, super thin slices of beef shaved off a rotating spit, and then topped with “donair sauce,” an oddly sweet concoction of white vinegar, garlic powder, evaporated milk, and sugar. If it’s ordered with the works, it’ll also come with some chopped onions and tomatoes, but that’s the extent of it.

And it really works: The meat is a little spicy, offsetting the sweetness of the white sauce. It’s a lot of meat and gets a little messy to handle, but it’s somehow just manageable enough. Late-night pizza spots are the province of this dish, and clearly, it’s best eaten post-pub. But even when you’re stone-cold sober, it’s kind of delicious.

A note on the donair’s history: Halifax-based site Eat This Town gives a great rundown of the donair’s origins, and how this dish morphed from the Iskender kepabs of Turkey and gyros of Greece to its current iteration in Halifax. This short of it? A Greek immigrant in Halifax doctored the gyro to better suit Haligonians’ tastes—namely, by making it sweeter.

Where: You can’t go wrong with a place that’s been doling out donair (and pizza) in Halifax for more than four decades. Tony’s Donair (two locations including the original at 2390 Robie St., map) is probably exactly the no-frills corner spot you might be imagining, and it’s a fine spot for a legit donair.

Order: A regular, medium or large ($6.95-$10.95) donair with the works: tomato, onion, and donair sauce. The meat is super thin, nicely spicy, and plentiful. It is a mess, but you will eat every bite of it—we guarantee! We also tried the donair egg roll here, because why not? It was a bit sweeter and crunchier than expected, more like an extra-long wonton.

Alternatively: You won’t lack for options in Halifax. Among others recommended to us include King of Donair (6420 Quinpool Rd., map), Johnny K's Authentic Donairs (5246 Blowers St., map), and Mezza Lebanese Kitchen (multiple locations including 1558 Barrington St., map), where the trusty donair is offered alongside its farflung cousin, the shawarma. Outside of Halifax? Find your nearest pizzeria—they’re probably making donair too.

Good to know: In case you’re wondering, given the omnipresence of donair at so many pizzerias, donair also makes an incredible pizza topping! Lots of pizzerias will offer it to top your pie, but we have to give a shout-out to the beautiful (dare we say, elevated) “Donaitor” pizza at the cozy waterfront South Shore restaurant Rhubarb (8650 Peggy's Cove Rd., Indian Harbour, map)—not only is it delicious (with housemade donair, tomato, and red onion, but the restaurant also donates $1 of each purchase to a local school.