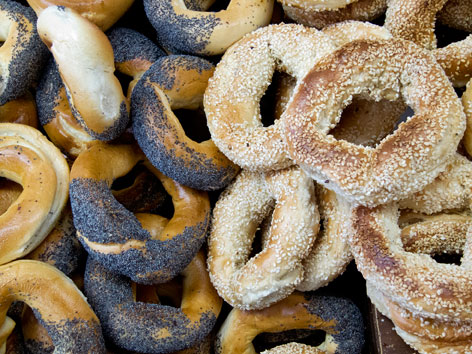 What: Like New York City, Montréal experienced a massive wave of Jewish immigrants around the turn of the 20th century, leading to, among other things, the elevation of the bagel as a major foodstuff. But that’s about where the similarities end: Montréal bagels are a lean, sweet affair, hand-rolled pieces of dough briefly boiled in water sweetened with honey and then baked in an antique wood-fired oven on long, thin slabs of wood. In the dough is flour, water, sugar, eggs, malt, vegetable oil, and yeast; noticeably absent is salt.

What results is a skinny bagel with a pronounced hole, nicely crunchy on the outside—thanks to those old-school hot ovens—and chewy inside, with a subtly sweet flavor. Their compact size makes them a damn good snack without spoiling your whole appetite, although you’ll be tempted to order three. There are two places you gotta know about when it comes to Montréal bagels.

Where: One of the two bagel stalwarts in town, St.-Viateur Bagel (263, rue St-Viateur Ouest, map) has been in operation in the Mile End neighborhood since 1957. Bagels here tend to be extra crispy on the outside, which we loved, but perhaps the best part for a visitor is the view: While you wait, you can watch bagels getting hand-rolled, boiled, and baked in a constant loop. Plus, if you say it’s your first bagel in Montréal, you might get one on the house.

When: 24/7, and we encourage you to take advantage of this! There’s nothing quite like a hot, fresh bagel at 3am (and the various walks of humanity you’ll encounter who are thinking the same thing).

Order: Get whatever’s coming out of the oven. Chances are, it’ll be sesame, as that’s the most popular variety, followed by poppyseed (70 cents). “All dressed” is what Americans might know as an “everything bagel”: a mix of seeds and spices all at once (still absent here: salt). Cream cheese and other spreads are sold separately from the adjacent fridge—another distinction from New York, which is much more of a schmear town.

Alternatively: Also open 24/7, and making bagels in an identically artisanal way, is Fairmount Bagels (74, ave. Fairmount Ouest, map), going strong since 1949. It’s St.-Viateur’s main competition in town, and every Montréaler will have a strong opinion as to which is better. After multiple taste tests, Fairmount took second place for us, as we found its bagels doughier, sweeter, and less crisp, a bit more like a honey-wheat pretzel in taste (minus the salt). We did like that Fairmount includes coarse salt in its all-dressed bagel—what can we say, we are fans of savory bagels! But it’s totally subjective, obviously, and these two shops are physically close enough to warrant trying a bagel from each. In the name of research, of course.