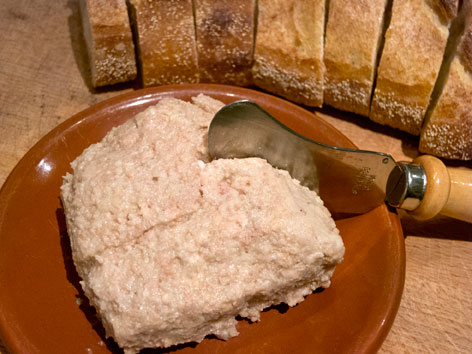 What: It tastes better than it looks, we promise: A cold pork spread, cretons (pronounced “cruh-tone,” more or less) is a Québécois mainstay typically eaten at breakfast, spread onto bread. Comparable to (yet distinct from) a French rillette or other potted meat, cretons can have a texture that varies from smooth to chunky, with semi-coarse but creamy being pretty common around here.

Made of ground pork and pork fat cooked with water or milk, bread crumbs, onions, and spices (often similar to those used in tourtiéres: cinnamon, cloves, nutmeg), this was likely one of those hearty, efficient, farmhouse foodstuffs that forest workers and the like once filled up on before heading out into the bitter cold for the day, but was beloved enough to remain ubiquitous today in grocery stores and at many diners. Cold, fatty, seasoned pork on bread not your cup of tea in the morning? Try some here, and you might change your mind.

Good to know: Most of the store-bought cretons you’ll find list glutamate monosodique—MSG—as an ingredient. To avoid it, look for the slightly pricier cretons biologiques.

Where: We picked up our cretons from Paradis du Fromage (514-933-7422; 116, Marché Atwater, map), one of three great cheese shops inside Marché Atwater, among Montréal’s best markets. Any of the fromageries here are great places to look for cretons, and pick up some Québec cheese and squeaky cheese curds while you’re at it.

Order: The cretons is priced at $11.95/kg, with the rather generous portion we left with just $2.22—this stuff comes cheap. We ate ours on a locally baked baguette and got quickly addicted to the moist, savory spread. Some people like adding butter, mustard, and/or mayonnaise to their bread, too, though we didn’t find it necessary. If you’re turned off by cretons at breakfast, know that it’s also a lovely accompaniment to a cheese plate in the evening (like this one!).

Alternatively: The fromageries and gourmet shops in and around Marché Jean-Talon are likewise good bets for this, including the excellent Le Marché des Saveurs (280, Place du Marché du Nord, map), which sells cretons biologiques, too. But you don’t have to travel far for cretons—most any grocery store or corner dépanneur is likely to offer both brand names (like Norel) and just-as-good bulk deli-style cretons, typically sold on Styrofoam bases wrapped in plastic.

If you want to try this at a restaurant, ask for a side of tasty cretons maison (homemade) at La Binerie Mont-Royal (367, ave. du Mont-Royal Est, map) or go to Brasserie Les Enfants Terribles (1257, ave. Bernard, map) for brunch.