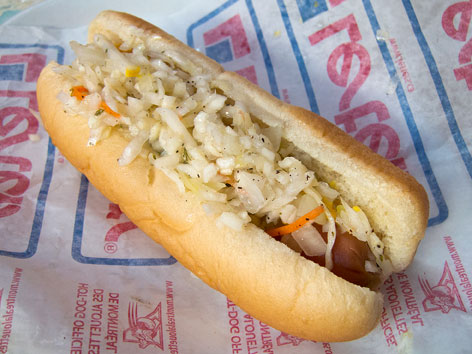 What: Despite not allowing food carts to roam the streets for 66 years—a ban finally lifted in the summer of 2013—Montréal is one of the few (if only) Canadian cities to have a real hot dog culture, and it’s the steamie we have to thank (as well as all those casse-croûte shops, or greasy-spoon-type snack bars and diners). Montréal’s spin on the classic hot dog, a steamie (or steamé), when ordered “all dressed”—as it must be, as it’s otherwise pretty bland—consists of a steamed hot dog encased in a pillowy steamed bun and topped with mustard, relish, a vinegary coleslaw, and chopped onion. (Don’t be that guy putting ketchup on his steamie. Just don’t.) While its overall soft texture might put off people used to snappy dogs, it’s a tasty, low-brow specimen that suits this poutine-riddled town well—particularly when accompanied by a few local beers.

Where: Our steamie hails from poutine den La Banquise (994, rue Rachel Est, map), a funky indoor/outdoor 24-hour joint that’s been feeding guilty pleasures to the Plateau-Mont Royal neighborhood since 1968. It was dishing out hot dogs before poutine was even invented, in fact.

Order: A steamie (or “steamed hot dog”; grilled is also available; $1.70) all dressed, which means all the typical accompaniments (the chopped onions, pleasantly, are grilled) in a super soft bun. We found it disappeared quickly after a few short bites, and particularly enjoyed the tanginess of the slaw. Of course, once you’re here you gotta try some poutine too. And check out the local microbrews available from the bar.

Good to know: The two other, less common types of hot dogs in Montréal are toasties, served on a toasted bun, and “Michigan dogs,” topped with a tomato-based meat sauce and more akin to the Coney Island hot dogs we found in Detroit.