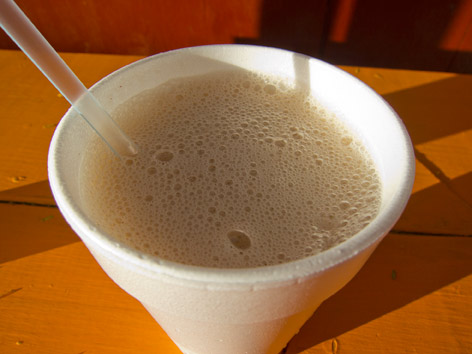 What: Popular nonalcoholic West Indian drinks, on Antigua and other islands, include those made with sea moss and sorrel. Sea moss—particularly popular in Trinidad, where it’s believed to increase virility—is a type of seaweed; for the drink it is dried, then boiled and blended with milk, ice, and sweeteners like cinnamon, sugar, vanilla, and/or nutmeg. Sorrel is made with the bright red flowers of the hibiscus plant, which are likewise boiled and then strained, cooled, and sweetened. Other popular local drinks on the island are ginger beer, peanut punch (a shake made with peanuts or peanut butter, milk, and sugar), and those made with locally grown seasonal fruits (pineapple, passionfruit, soursop, banana, guava, etc.).

Where: Not far from where the cruise ships dock, a vegan deli called sWholefoods & Deli (Heritage Quay, Lower High St., St. John’s) makes these drinks and more behind its small, unassuming storefront.

Order: Pictured is the sea moss shake (10 EC), which we had blended with soy milk at the recommendation of the staff (also, the place is vegan). It was delicious; with its subtle cinnamon flavor, it reminded us of a creamier, less sweet horchata. We also enjoyed the refreshingly tart, sweet sorrel drink here (5 EC).

Good to know: You can find fresh (dried) sea moss in town, should you want to make your own shake at home. Try C&J's Fish Shop in St. John’s, which usually stocks some in one of its coolers.