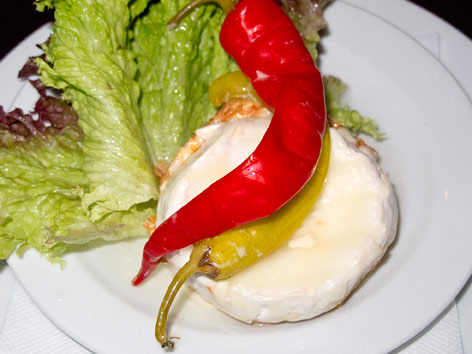 What: “Pickled cheese” may not sound (or smell) like the most appealing thing in the world, but this classic Czech bar snack is a winner in our books. Hermelín is the cheese in question, comparable to Camembert or Brie—soft and creamy, with an edible rind—and it gets pickled for a few days in oil, peppers, garlic, and spices, usually including paprika and something a little fiery. It’s typically served with peppers, onions, and a healthy dose of oil alongside dark Czech bread or topinky, and of course a beer (or three). It’s a fun, tasty little bar snack that we found really satisfying. Here's where to look for this iconic Czech dish.

Where: Smoky U Fleků (Křemencova 11, Praha 1, map) is most definitely tourist-friendly, but, especially if you’re a first-timer to Prague, you should come here anyway, for a house-made brew and a small beer snack. Brewing for 500 years straight, it claims to be one of the oldest beerhouses in Prague, where raucous musicians and servers, holding trays covered with foaming mugs of beer, roam among the crowded communal tables. You won’t be without a drink for long here. (Fortunately, the dark house lager, Flekovský ležák 13°—the only beer made here—is smooth, roasty, and extremely quaffable.)

Order: Our nakládaný hermelín (99 CZK), pronounced “nahk-la-dan-ee her-mel-een,” served with a few mild peppers and an entire loaf of good fresh bread, hit the spot as we downed a few mugs of “Flek.” Inside the cheese was a flavorful mix of garlic, mustard, salt, and pepper, plus something that added a little spice. It was quite tasty when spread on the bread and chased with the beer. After that, it’s time to move on from this place—if the smoke doesn’t do you in (there are non-smoking areas, at least), eventually the crowds and alcohol will.

Alternatively: Try it anywhere you’re having a good beer, such as at a beer garden or a bar like Zlý časy (Čestmírova 5, Praha 4, map) or Pivovarský klub (Křižíkova 17, Praha 8, map). Or, what looks to be a more delicate hermelín is on offer at Lokál (two locations including Dlouhá 33, Praha 1, map).