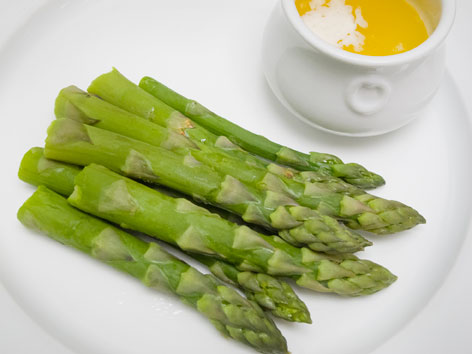 If you’re here in the spring, during its short but sweet season, chances are you’ll see British asparagus on every gastropub menu in town. In this most classic of preparations, local spears are steamed and served with hot butter, so as not to detract much from the vegetable’s fresh sweetness. Simple yet elegant.

Where: Though it’s better known for its nose-to-tail meat dishes, St. John (26 St. John St., map), in the East End neighborhood of Clerkenwell, is foremost an adherent to seasonal cooking, and that certainly extends to veggies.

Order: The asparagus and hot butter (£8): a handful of soft, stout spears sourced from the England-Wales border during our visit. The ramekin of melted butter stands politely off to the side, as if to say, “I’m here, but only if you want me.” And you want just a little, as the fresh asparagus is so deservedly the star of this show. Also on the bar menu here, don’t miss the restaurant’s signature roast bone marrow with parsley salad.

Alternatively: We weren’t exaggerating when we said every gastropub will feature asparagus in season—come spring, it’s a big deal here, along with Jersey Royal new potatoes and rhubarb everything. And as those menus constantly change, we can’t say for sure who will carry it prepared this way (asparagus tarts are also quite popular). During our visit we saw this same dish on the menu at the acclaimed Anchor & Hope (020-7928-9898; 36 Waterloo Rd., map) in Waterloo, and a similar preparation, with Hollandaise rather than plain butter, at Draft House (multiple locations including 206-208 Tower Bridge Rd., map) near Tower Bridge and Blueprint Café (1st floor Design Museum, 28 Shad Thames, map) near London Bridge, where they’ve been known to serve asparagus with butter sauce, a poached egg, and parmesan. You might also try Hereford Road (3 Hereford Rd., map), in Westbourne Grove.