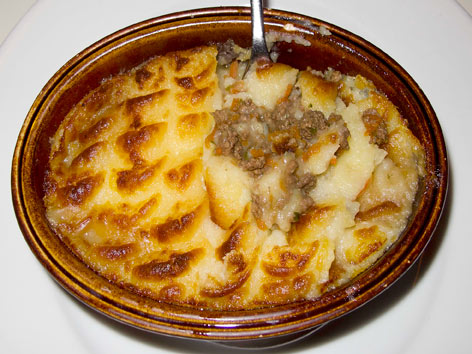 While not strictly London dishes—it’s widely accepted that they hail from the bucolic sheep country in the north of England and Scotland—these hearty pies certainly fall under the larger umbrella of symbolic, widely found U.K. foods worth seeking out in England’s capital. So what’s the difference between cottage pie and shepherd's pie? Both baked meat pies topped with mashed potato, cottage pie is made with minced or diced beef while shepherd’s pie is minced or diced lamb. That’s it. It is assumed that resourceful 18th-century peasant housewives invented the pies as a way of repackaging leftovers; indeed, even today their home preparation often involves using leftovers from Sunday roast lunch. We don’t really think of ourselves as meat-and-potatoes types, but this dish, when done well, is unapologetic comfort food at its best.

Order: It's not always available, but the cottage pie (£11.75), made with minced beef, chopped carrots and onions, and creamy mashed potato—appropriately crispy on top, from the oven—was great here, especially paired with a decidedly non-peasanty Meantime London stout or amber lager. We also liked the kedgeree at Albion, though you might also try another favorite English pie: fish pie.

Alternatively: Lots of pubs and cafes will carry one or the other of these pies, though keep in mind that many regular old pubs are better for just drinking in, if you get our drift. Shepherd’s pie is usually on the menu at Canteen (multiple locations include Royal Festival Hall, Belvedere Rd., map). In Shoreditch, the Carpenter’s Arms (73 Cheshire St., map) usually carries a cottage pie cooked in ale, or, for a quick one to go, you can try local mini-chain Square Pie (multiple locations including 105c Commercial St., Spitalfields Market, map), which claims its cottage pie, using high-quality ingredients, is even “low-fattish.”