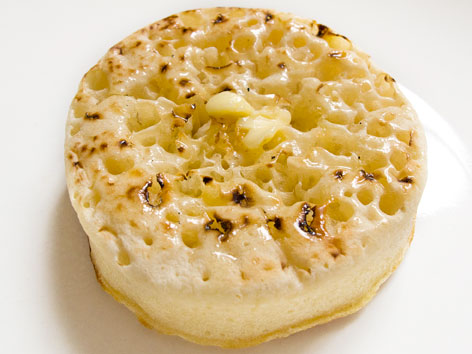 What: A traditional teatime treat, crumpets are spongy, cratered little savory cakes meant to be toasted and spread with butter, which drips and soaks into the many pits on its top surface. Those holes are a characteristic feature today, but it’s likely they didn’t appear until the Victorian era, when bakers added yeast and then baking powder to a pancake-like flour-egg-milk base. In any case, the buttered crumpets of today are addictively tasty, in a restaurant or from a grocery, with tea or for breakfast. They are like the actual British version of Thomas’s English muffins—these nooks and crannies are the real deal.

Where: Once we discovered the joys of crumpets, we bought ours packaged from the Waitrose (multiple locations including 23-39 The Brunswick Centre, Bloomsbury, map) line of grocery stores.

Order: We had access to a toaster—and wanted multiple crumpets on multiple days, natch—so a Warburtons-brand six-pack (95p) was the way to go. They toast up nicely: crisp on the outside and spongy inside, with plenty of holes for butter and jam soakage. Indeed, a package of these crumpets may or may not have ended up in our luggage home.

Alternatively: If you’re looking for crumpets in a restaurant setting, try Soho’s Dean Street Townhouse (69-71 Dean St., map), the well-regarded Rivington Greenwich (178 Greenwich High Rd., map), or brunch favorite Caravan (multiple locations including 11-13 Exmouth Market, map) in Clerkenwell, which offers “two crumpets with too much butter” (as if!) alongside excellent house-roasted coffee and other morning favorites.