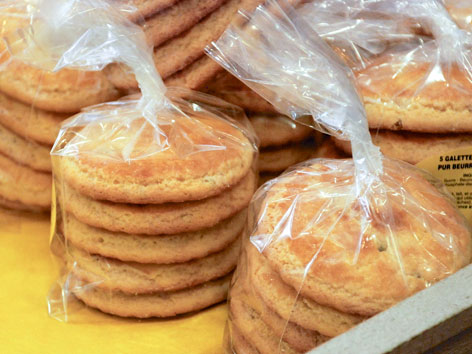 What: It is said that Henri Victor Barraud made the first-ever galette de Beurlay in 1848. Like other bakers, he used local flour, eggs, butter, and sea salt in his confections. But Barraud decided to add an extra ingredient to set himself apart: l’angélique, or wild celery, which grows in the region’s marshes. This unusual addition lends this galette, or flat cake, a slightly savory funk. Four generations later and his family is still producing Barraud’s creation at La Patisserie Beurlay in Beurlay, some 30 miles southeast of La Rochelle (see below). Meanwhile, the galette de Beurlay has become a cultural mainstay across Charente-Maritime—the flat, crumbly cake is often served at birthdays, weddings, and baptisms. It’s popular not only for its distinctive taste, but also for its customization: Depending on the size of the party, a galette de Beurlay can range from the width of a coffee cup to the width of a tire. They are typically unadorned, but can also be decorated with candies and personalized with icing designs.

Where: The Boutique de La Rochelle (+33-5-46-0721-85-27; Rue des Gentilshommes) is located in the center of La Rochelle, a quick walk from the old port. You will recognize it by the giant paper cut out of a galette de Beurlay outside the shop, printed with two happy words: “Dégustation Gratuite” (free samples).

Alternatively: If you’re able to drive down to Beurlay, you can visit (and tour) the factory at La Patisserie Beurlay (1 route de Saintes, Beurlay, map) on Friday mornings in April, May, June, and September. There is also an onsite shop where you can purchase some galettes de Beurlay, right in their birthplace.