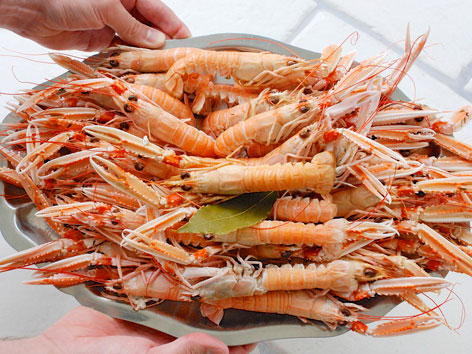 What: Charente-Maritime is the holy grail of local, freshly caught shellfish. It’s not enough to say “oyster,” “clam,” “shrimp,” and “lobster.” These designations are simply umbrella terms that open into a myriad of culinary options. A portion of the region’s shellfish are served in restaurants, but for a true understanding of the vastness of options, take a trip to a fish market. La Cotinière on Île d’Oléron is the most famous, but the daily market in La Rochelle is also impressive. (Note: Please also see our separate entry on the region’s mussels.)

Huîtres (oysters), particularly from Île d’Oléron, are highly prized. They are always eaten at New Years, but strictly speaking, any day of the week is an appropriate time to eat them in Charente-Maritime. Oysters range in size, from 5 to 00, 5 being the smallest and 00 the largest. (To put this into perspective, a 00 oyster is easily as long as your hand.) After size, oysters are further designated by quality. For example, it’s important to consider how long an oyster has spent in a clair (a shallow, saltwater pond), but also how many other oysters it shared the clair with. It can be quite confusing, as there are so many variables; however, as with most things, you can usually figure out the quality of one oyster over another based upon price. Oysters are eaten raw and dressed simply with lemon juice or mignonette, a blend of shallots, vinegar, and cracked pepper.

What most people would recognize as a clam could actually be any number of things in Charente-Maritime. There are bulots (whelks), amandes (cockles), palourdes (carpet-shell clams), and bigomeaux (winkles). Here, coquille St. Jacques (scallops) are served in the shell, with their roe. You are most likely to encounter these five shellfish on a restaurant menu, although a trip to the market in La Rochelle or La Cotinière would reveal many more besides. These small shellfish are usually steamed simply in their own juices.

Crustaceans are a whole separate category. You will find homard (lobster) as well as tourteau (crab). In Charente-Maritime, a shrimp is not simply a shrimp: Crevette gris are tiny, salty, and gray, eaten whole on buttered toast. A crevette rose is a prawn. A langoustine is somewhere between a shrimp and a lobster, something like a saltwater crayfish. The above crustaceans are often served with homemade mayonnaise.

Where: Our photo is of local langoustines steamed at home, but an identical preparation is common in restaurants throughout the region. Few offer as complete a menu as Bar André (5 Rue Saint-Jean du Pérot) in La Rochelle, where you can find everything mentioned above, plus a number of local fish dishes and mouclade au pineau des Charentes (mouclade made with pineau; see also: local mussels).

Order: In order to maximize your shellfish tasting, look to the plateaux des fruits de mer (shellfish platters) section of the menu. At Bar André, there are three platters offered, each with different proportions of shellfish (including oysters, langoustines, prawns, whelks, crab, and cockle), which range from €20,05 to €33,50.

Alternatively: Keep your eyes peeled for shellfish in almost every restaurant you go to in Charente-Maritime. For terrific atmosphere, we like the many terrace restaurants that line La Rochelle’s old port. Quality wise, you can’t do better than Les Flots (1 Rue de la Chaîne, map) at the port’s edge, just next to the Tour de la Chaîne (Chain Tower); it’s a splurge, but this restaurant utilizes the best ingredients the ocean has to offer. If you find yourself on Île d’Oléron, visit one of the independently owned oyster producers, like Chez Mamelou (05-46-75-44-41; Route des Huîtres, map), a no-frills oyster joint along the so-called Oyster Road. The terrace bar sits directly on the canal through which oysters are transported from the ocean to saltwater ponds, so you can watch the action happening as you eat insanely fresh shellfish. Even better, you can sip pineau here as you slurp down your oysters.