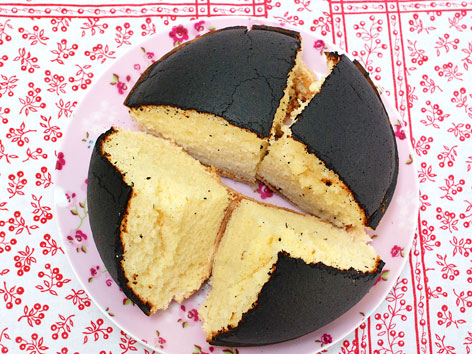 What: As often seems to be the case with specialty foods, the first tourteau fromage, the area’s local cheesecake, is said to be the product of an accident. According to legend, a 19th-century cook mistakenly plunged a tourteau, or pie (tourte), into a scalding-hot oven, resulting in a hard, blackened crust (nope—that’s not chocolate on the outside). Hoping to salvage some part of the cake, the cook lowered the temperature and finished baking. But as it transpired, the burned crust protected the interior of the cake from the oven’s heat: The finished tourteau was soft and springy, with a texture just denser than angel food cake. Tourteau fromage is made with flour, sugar, egg yolks, whipped egg whites, and fresh local goat cheese. The goat cheese, which gives the cake a pleasant tang, is essential; as a result, it’s just as common to find tourteau fromage made by a cheese producer as it is to find one in a bakery. Traditionally, this sweet was served with Champagne at weddings, but now it’s just as likely to be enjoyed for dessert or even breakfast. Keep in mind that it’s not well known outside of the region.

Where: Unless you want to stick your head into a bunch of patisseries to check whether tourteau fromage is in stock that day—at some bakeries you have to request it—the easiest thing to do is visit a supermarket, like any Carrefour in the Charente-Maritime region. We bought ours at the Angoulins branch (Rue de Rochefort). They come prepackaged, for about €2 depending on its weight, and ready to be slid into a suitcase for the trip home.

Good to know: Some people eat the blackened crust of a tourteau fromage, and some don’t—it’s a matter of personal preference. The burned edge is quite thin, but it does taste distinctly, well, burned. Taste it for yourself before deciding.