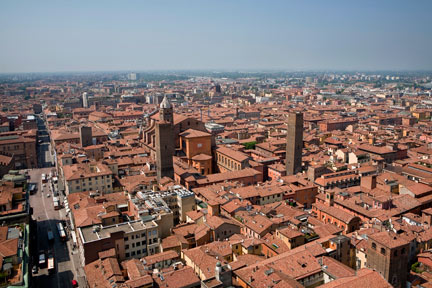 In Bologna, climb the nearly 500 steps of the medieval Torre degli Asinelli (Asinelli Tower; €3) in the center of town—if you dare, as no one can really explain why the leaning 334-foot (102m) tower, constructed in the 12th century, continues to fight gravity and win. It and its shorter neighbor, Torre degli Garisenda, are two of a handful of survivors from the 100-plus medieval skyscrapers that once composed Bologna’s cityscape. The views from the top—where you can spy a few other towers interspersed among the city’s red roofs and narrow passageways—are worth the minor, ahem, risk.

In Modena, visitors can climb the graceful Ghirlandina bell tower, built between the 12th and 14th centuries and recently restored, on weekends between the months of April and October (check this site for exact opening days). Overlooking Piazza Grande, the tower rises from the rear of the city’s gorgeous Romanesque cathedral, a UNESCO World Heritage Site. It is expected to be open Sundays from 9:30am-12.30pm and from 3pm-7pm (€1).

In Bologna, follow the route of many a religious pilgrimage to the hilltop Sanctuary of the Madonna di San Luca (Via di San Luca 36, map), an 18th-century church (and shrine house) connected to the city center via the world’s longest uninterrupted portico—666 arches in total spanning 2.3 miles (3.8 km), which was designed to provide shelter for the annual procession that (still) carries the icon to the church during Ascension Week. Along the breezy, lovely route are various old chapels and museums. To get there, go to Porta Saragozza in the city’s southwest corner (reachable via bus no. 20 from within the city) and follow the arcade all the way up. To shorten your walk a bit, you can take the no. 20 bus further to the Meloncello Arch on Via Saragozza—but we think you can handle it.