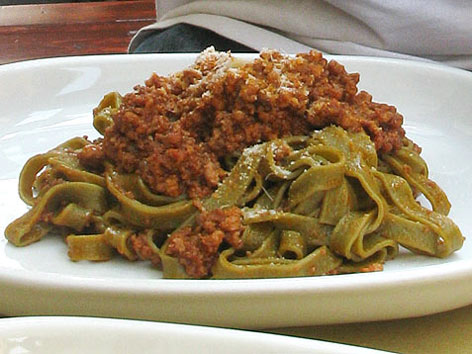 What: Ah, Bolognese sauce. How simple and delicious it is, and yet how misrepresented it can be outside of Italy—too sweet or tomato-y, too spiced, too minced, too wet, too carelessly dumped atop slippery overcooked spaghetti. In Bologna and elsewhere in Emilia-Romagna, there’s very little tomato and no spices in this sauce, and the pasta is always tagliatelle, long flat ribbons made fresh and cooked perfectly al dente—the ideal noodle to carry a thick, rich, beefy ragú. The two elements of this dish are so good, in fact, it’s hard to tell if the pasta is meant as a vessel for the sauce, or vice versa.

Where: We had this tagliatelle, which was made with ortica (green nettle), at Il Cantinone (Via del Pratello 56/a), a rustic osteria in Bologna with sidewalk seating on a lively, bar-filled street.

Alternatively: In Bologna, this dish is very easy to find. We also enjoyed it at the cheap and rowdy, no-frills student haunt Osteria dell’Orsa (Via Mentana 1, map), where you might wash it down with a pitcher of beer. Other restaurants that carry it include Drogheria della Rosa (Via Cartoleria 10, map), an old pharmacy-turned-trattoria, and Cantina Bentivoglio (Via Mascarella 4/B, map), an enoteca, osteria, and world-class jazz club with a heavily Bolognese menu, offering this dish as well as tortellini en brodo, tortelloni, mortadella, and more. At Ristorante al Pappagallo (Piazza della Mercanzia 3C, map) and Ristorante Diana (Via dell’Indipendenza 24, map), you might order this tagliatelle alongside the region’s famed lasagna verde, a green lasagna made with spinach.