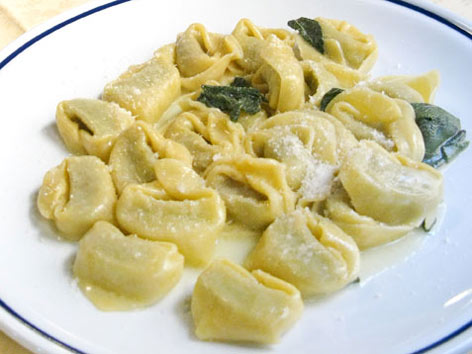 What: Tortelloni—a large ring-shaped pasta commonly stuffed with cheese and greens, and often served with butter and sage—is the big sister to tortellini (the latter is more often found en brodo (in broth), topped with a meaty ragu, or stuffed with a meat-cheese combo). Both are common in Emilia-Romagna, a region celebrated for its various stuffed (and not-stuffed) egg pastas.

Where: Our ricotta-and-spinach-stuffed tortelloni with butter and sage was from Bologna’s Ristorante Il Pirata del Porto (Via del Porto 42), a warm, unassuming restaurant and pizzeria near the train station and right around the corner from MAMbo, the capital’s worthy modern art museum.

Order: The decadent tortelloni was impossible not to love; the restaurant also offers the dish with gorgonzola and walnuts. Incidentally, the pizza is excellent here, too. And the price is right: Lunch for two (two pastas, one pizza, with wine) during our visit cost about €31.

Alternatively: Various kinds of similar stuffed pastas are found all over Emilia-Romagna, particularly in Bologna. In that city, you might try the tortelli di stracchino and squacquerone (stuffed with two cheeses and zucchini blossoms) at Drogheria della Rosa (Via Cartoleria 10, map), a former pharmacy, or the tortellini di zucca (squash) with guanciale (pancetta-like dried pork jowl) and balsamic vinegar at Trattoria Trebbi (Via Solferino 40/b, map).