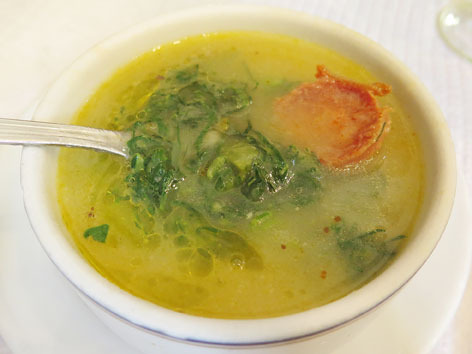 What: Despite originating in the Minho province of northern Portugal, caldo verde, or “green broth,” has become the most widely known Portuguese soup of all, a stalwart of Portuguese communities abroad and pretty much a national dish. Besides the shredded greens (usually kale or collard greens) it’s named for, there’s always potato in the broth (often pureed, for a thicker texture) and a scattering of sliced chouriço. Like all good Portuguese soups (and there are many), it’s homey and earthy and flavorful. But while soups tend to rotate on Portuguese menus, caldo verde is one that often enjoys a permanent listing—for good reason.

Where: This iconic soup is easy to come by in Lisbon; any local tasca (or fado club, see below) should be a good bet. Ours is from Restaurante A Merendinha do Arco (Rua dos Sapateiros 230, map) by the Rossio Arch, a popular, welcoming spot with communal tables that get quite crowded during lunchtime.

Good to know: This dish is easy to replicate at home! Here’s how to make caldo verde.

Alternatively: You could try a simple eatery like Cafe Beira Gare (21 342 0405; Praça Dom João da Câmara 4, map), our pick for its fabulous bifana, or garlicky pork sandwich. If you’re not seeing this on many tascas’ menus, try a fado club, as caldo verde is traditionally served there. In the Bairro Alto, we like the popular Tasca do Chico (two locations including Rua doDiario de Noticias 39, map)—go on a Monday or Wednesday, when it’s usually amateur night (and get the chouriço assado too). In the Alfama, try the fancier Páteo de Alfama (Rua São João da Praça 18; map).