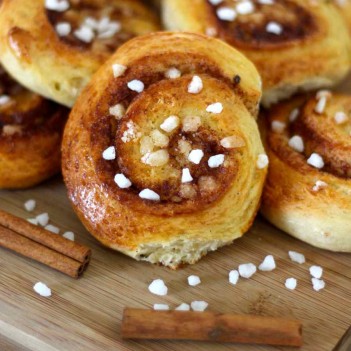 Also called cinnamon roll, this little bun is topped with softened butter, sugar and cinnamon. In Sweden, where it seems to originate, it is called kanelbulle, which simply means “cinnamon bun”. Kanelbullar were made popular in Sweden in the 1920s, after World War II, but it has really become a fairly common pastry in the early 1950s. In the nineteenth century, ingredients such as flour, sugar, cinnamon, butter, and eggs were considered luxurious and their enjoyment was generally reserved only for wealthy families. Today, kanelbulle is the most popular Swedish pastry… so popular that an International Day of kanelbullar was started in 1999. It is now held every October 4th. The International Day of this small bun was started by the Home Baking Council (Hembakningsrådet), a club of baking ingredients producers today managed by the Danish sugar producer Dansukker. Cinnamon buns are also widespread in the United States. Kanelbullar are not as sweet and sticky as the typical American cinnamon rolls though. Another key difference in that the Swedish version of cinnamon buns includes cardamom in the dough. US buns are served with icing on top while kanelbullar are topped with pärlsocker or pearl sugar.