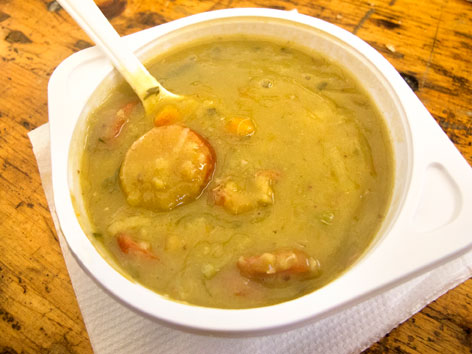 What: Erwtensoep (pronounced “air-ten-soup”) is traditional Dutch pea soup, also known as snert (although it may be that snert is technically day-old erwtensoep). Simple and earthy, it likely sprung from some self-sufficient farmhouse in the Dutch countryside. It’s characteristically very thick, made of split peas, chopped vegetables (onion, leek, celeriac, carrot, potato), pork (ribs, trotters, and/or bacon), and sliced rookworst, the local smoked sausage; and it’s typically served with roggebrood, a dense rye bread. On a cold day, there’s no better remedy for warming your belly.

Where: The best pea soup we tasted was from a stand called “Menno,” after the guy who runs it, in the Noordermarkt (Noorderkerkplein), a famous flea market in the Jordaan that turns into an organic farmers market (Boerenmarkt) on Saturdays.

Order: The erwtensoep (€3), thick with peas, potato, and carrot, with slices of rookworst at the bottom (as is the typical serving manner, thin coins of the sausage are added to the bowl before the soup). The soup was hearty and delicious, with a rich smoky flavor, made all the better by the fact that we ate it outside at a picnic table, in the cool autumn weather. During our visit there were a few other items at this stand that proved delicious must-eats: the beenham (sliced cooked ham), braadworst (white sausage), and peppery gerooktezalm (smoked salmon) sandwiches, all served on perfectly crusty fresh bread.