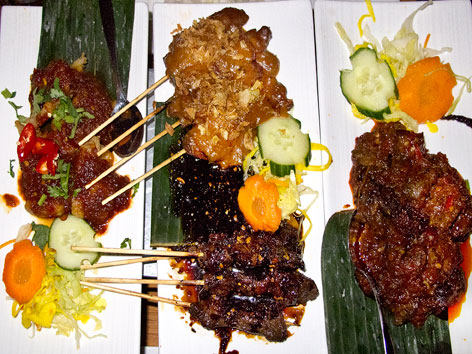 Put simply, Indonesian food in the Netherlands is a must, and especially in Amsterdam, where dining options abound. And the No. 1 thing to eat at an Indonesian restaurant in Amsterdam is rijsttafel. Dutch for “rice table,” rijsttafel (“ryst-tah-fell”) is a by-product of Dutch colonialism in Indonesia, which, if we count the days of the Dutch East India Company, stretched for more than three centuries, formally concluding in 1949.

When the Dutch returned home, they brought with them an undying affection for satay (spicy peanut) sauce, a handful of Indonesian stir-fry standards, and rijsttafel—-the practice of serving many small Indonesian dishes, revolving around rice, at one time to best show off the archipelago’s flavorful cuisine (it’s likely the Dutch were inspired by a similar Sumatran manner of feasting, called nasi padang).

Modern-day rijsttafel is the same exact idea: Cram every inch of your table with anywhere from eight to 40 small plates—a variety of meats, vegetables, and condiments, like sambals and pickled dishes—and eat them with steamed white rice. It’s a tradition that is relatively unique to the Netherlands today, where it’s considered nearly as indigenous as stamppot, and it adds some much-appreciated exotic spiciness to Amsterdam’s culinary scene. If you crave a change from those hearty Dutch classics you’ve been filling up on, rijsttafel is your answer. Just show up hungry.

WATCH: A one-minute trip through Amsterdam.

Where: Amsterdam has many good rijsttafel options, and some of the better ones get very expensive, fast. We chose Sampurna (Singel 498) based not only on its (mostly) favorable local reviews, but also its various price points (four options ranging from €27,50 to €34,50) and reputation for being one of the spicier Indonesian restaurants in town. Bonus: It’s located across from the Bloemenmarkt (flower market), which will be open if you come at lunch.

Order: For our group of seven, we ordered a few “celebes” (€34,50 per person, 15 dishes)—the “highest quality,” according to our server—and vegetarian (€27,50, 12 dishes) rijsttafels, which were served family-style in a long row across our table. Don’t be fooled thinking you need 40 dishes—15 proved more than sufficient! (And we, uh, like to eat.)

Favorites among the spread were the very spicy daging blado (tender braised beef), sate lilit (grilled minced fish on a lemongrass skewer, with peanut and spicy chile sauce), sate kambing (skewered goat with a complex, richly flavorful sauce), and, off the veg menu, tahu pepes (tofu with fresh lemon basil, in a banana leaf). Pictured is the braised beef, the goat and chicken (ayam) satays, and the fish in spicy Balinese sauce (ikan Bali). To drink? Indonesia’s Bir Bintang—brewed by a Heineken subsidiary, fittingly.

Alternatively: Intimate Tempo Doeloe (Utrechtsestraat 75, map) is the oft-recommended darling of Amsterdam rijsttafel, serving up to 25 dishes in one sitting, with prices in the €40 range (reservations required). Likewise, modern and stylish Restaurant Blauw (Amstelveenseweg 158-160, map), near pretty Vondelpark, is a popular choice, vouched for by local blogger Dutch Grub, with a few rijsttafels for less than €35 and a large à la carte menu. If you’re on a tighter budget (or dining solo), try the more casual Bojo (Lange Leidsedwarsstraat 49-51, map), where you can score mini-rijsttafels for €16 or less, among other options.