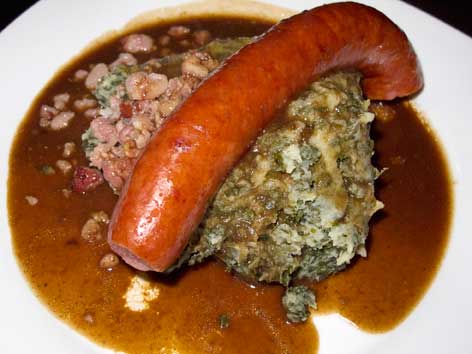 What: This classic Dutch stick-to-your-ribs food, popular in the cooler months, consists of boiled potatoes mashed together with different vegetables, such as kale (boerenkool stamppot) or endive (andijvie stamppot), usually served with rookworst, a smoked sausage. Most traditional of the stamppots is hutspot, which loosely translates as “hotchpotch,” a mix of boiled potato, carrots, and onion; it’s often served met klapstuk, or with a piece of braised beef. Hutspot’s origins famously stretch back to 1574, when the starving people of Leiden celebrated victory over their Spanish invaders during the Eighty Years’ War. As the legend tells it, once the clever Dutch successfully flooded the land, the Spanish vacated quickly, and in the haste someone apparently left behind a pot or two of this strange veggie stew (which back then contained parsnips rather than potatoes). The hungry locals devoured it and named it hutspot. The hearty dish also played a role in fortifying the Dutch during World War II, as its main ingredients were all grown underground, out of view from the pillaging Nazi occupiers. A pretty impressive history for such a simple dish.

Where: The warm and cozy De Blauwe Hollander (Leidsekruisstraat 28) is a good bet for trying a range of traditional, fresh Dutch food.

Order: The restaurant offers a traditional hutspot (€12,25) and a few good stamppots (€12,25-€12,75). Pictured is the (seasonal) kale version, the leafy green and potato mashed with some bacon, and a huge rookworst, which tastes similar to kielbasa, draped rather suggestively on top. We found the potato-veg alone a bit unsatisfying, but once the meat and some mustard were added in, it was quite enjoyable. The meat-and-potatoes hutspot, too, being the plainest-tasting (although including some very tender beef), benefited from some mustard. Our favorite dish was the sauerkraut, or zuurkool, stamppot, as the stewed cabbage added a lot of flavor. All the dishes came with a nice comforting gravy.

Alternatively: Traditional-Dutch-food purveyor Hap-Hmm (Eerste Helmersstraat 33, map), open since 1935, is a popular choice for stamppot/hutspot at dirt-cheap prices (hovering around the €7,50 range), though be warned it’s open weekdays only (and the kitchen closes at 8pm). Also quite affordable (and more popular among locals) is the seasonal Stamppotje (multiple locations including Nieuwmarkt 30, map), the winter incarnation of the beloved IJscuypjes summertime ice cream shops, where you can build a few different varieties of stamppot/hutspot (including a pumpkin version), with optional add-ins such as cheese, bacon, rookworst, and veal.