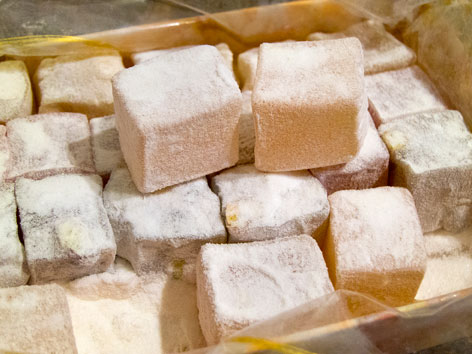 What: Turkish delight (lokum)—you’ve probably heard of it and maybe have tried it before, but what is it, exactly? It’s a gummy, fragrant, delicate sweet, a confection made of slow-cooked sugar-syrup and corn flour/cornstarch that’s poured out, left to set, cut into fat cubes, and then rolled in icing sugar (a.k.a. powdered sugar). That’s plain (sade) lokum. But then there’s a rainbow of flavors (lemon, rose, orange, mint, cinnamon, ginger, coconut, chocolate, apricot, etc.), crunchy add-ins (pistachio, hazelnut, walnut), and myriad toppings, from the basic sugar to dried coconut, ground pistachio, even rose petals. They’re not always cubed, either—the most photogenic of lokum are rolled into colorful logs, sliced crosswise to display studded interiors, and showcased at markets (those are more likely to include mastic and have a chewier texture, by the way). Whatever the shape or color, the lokum you encounter in Istanbul is most likely going to be freshly made and astoundingly delicious. Finally, we can see why it was such a hit in the Ottoman palaces.

Good to know: It’s often said that a confectioner named Bekir Effendi (known as Hacı Bekir following his hac, or pilgrimage, to Mecca) invented lokum when he opened up shop in Istanbul in 1777, but, according to The Oxford Companion to Food, there is no real proof of this. Even the current Hacı Bekir website does not claim invention, mentioning instead that its founder’s product was merely “the choicest of lokum,” largely thanks to his innovative use of starch over flour. It does claim indirect responsibility for the term “Turkish delight,” however, stating it was Hacı Bekir’s lokum that a tourist brought home to England in the early 19th century and enjoyed so much as to prompt the English name. The Oxford Companion isn’t so sure, saying lokum was originally called “lumps of delight” once it made its appearance in England. Either way, the stuff’s delightful.

Where: Hacı Bekir’s sweet tradition continues today via his descendants and Ali Muhiddin Hacı Bekir (multiple locations including Hamidiye Cad. No. 83, map), the original wood-paneled shop of which, in Eminönü, is the one established in 1777. The service might be a little gruff, but the product is great, especially for buying to take home or travel with, as the packaged boxes come tightly wrapped.

Order: A small box of mixed lokum—plain, rose, hazelnut, pistachio—costs 13 TL, and that’s the bare minimum of what your souvenir haul should be. The lokum is very good here—super fresh, very soft, just the right amount of sweet—and their size is a little too poppable-in-your-mouth (your box will go fast). Get a bunch, in a wide range of flavors, and bring them home to people you like. While you’re at the shop, taste another old-school Ottoman favorite: demirhindi şerbet, a tart tamarind drink.

Alternatively: It’s a national chain, but we loved the beautiful selection of lokum we picked up at Mado (İstiklal Cad. No.121, map), a café otherwise known for its ice cream. Fancier is Divan Patisserie (multiple locations including Cevdet Paşa Cad. No. 28/A, Bebek, map), celebrated for its housemade lokum. But for trying a variety of fresh lokum on the spot, we recommend you hit up the markets. We loved the experience of wandering—more like elbowing, actually—through the Misir Çarsisi, or Spice Bazaar, sampling its many edible treats. Here you will find gorgeous displays of rolled and cubed, sugar-dusted and nut-studded lokum in between stalls of spices, dried fruits, nuts, sucuk, cheese, and more. Best of all, you can taste before you buy.