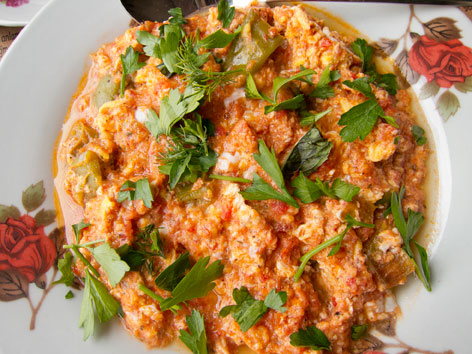 What: This classic scrambled-egg breakfast is a real crowd-pleaser: Eggs are loosely scrambled in butter with green peppers, tomato, onion, and seasonings, and then served with bread, often in single-serving copper or cast-iron pans. The tomato is cooked down so much to become almost sauce-like; the eggs are fully cooked but served quite wet. Often you have the option of adding in a Turkish meat like sucuk, a spicy beef sausage. It’s similar to the North African dish shakshuka, but the eggs in menemen are typically scrambled. This dish may have originated from Menemen district in Izmir Province, in western Turkey, but given its widespread popularity around the country, it’s a must while in Istanbul.

Where: On a side street near touristy Galata, cozy Café Privato (Galip Dede Cad., Tımarcı Sokak No. 3B, map) is a lovely haven from the madding crowd, with an airy dining room, award-winning breakfasts, and some of the nicest waitstaff we encountered in the city. It’s easy to get comfortable here.

Order: The menemen (13 TL) was creamy and delicious here, topped with lots of fresh parsley and dill. This dish also comes as part of the excellent “village breakfast,” among a table’s worth of traditional Turkish day-starters like farm cheese, olives, tomato and cucumber salad, bread, and homemade jams.

Alternatively: Menemen—and good breakfast in general—is easy to score in Istanbul. In Beyoğlu’s trendy Cihangir neighborhood, Van Kahvaltı Evi (212-293-6437; Defterdar Yokuşu No.52/A, map) is a longtime favorite among foodies; it specializes in the big regional breakfast spreads of Van, in far-eastern Turkey, but has great menemen, too. Following the Bosphorus north, try Sarıyer district, where breakfast/brunch joints are aplenty: Good ones include Sade Kahve (Yahya Kemal Cad. No.20/A, Rumelihisarı, map) and the popular Rumeli Kale Café & Pastane (Yahya Kemal Cad. No.16, Rumelihisarı, map), both within view of the Bosphorus in Rumelihisarı, and Emirgen Sütiş (multiple locations including Sakıp Sabancı Cad. No.1/3, map) further north in Emirgen, which sources many ingredients regionally.