Within the city, some of the best neighborhoods to explore thoroughly on foot include the art- and history-filled Centro Histórico—heck, just walking across the massive Zócalo, the world’s second-largest public plaza, a few times will burn a nice handful of calories—the hip Brooklyn-esque colonias of Condesa and Roma, and the relaxed neighborhood of Coyoacán, one-time stomping grounds of artist Frida Kahlo (as well as an asylum-seeking Leon Trotsky).

D.F. is rich in parkland —many visitors are surprised at just how many trees they see. The city’s largest park, the Bosque de Chapultepec (map), is a 220-hectare (543-acre) oasis of greenery and art in the middle of the urban jungle, home to jogging paths, a lake with rental rowboats, the presidential mansion, city zoo, several museums including the excellent Museo Nacional de Antropología, and the city’s towering landmark, the Castillo de Chapultepec. The centuries-old Alameda Central, on the spot of a former Aztec marketplace located just west of el Centro, is another leafy, pleasant spot for a stroll, dotted by classical fountains and affording great opportunities for people-watching (especially on Sundays). Also great for exercise is the smaller, more neighborhoody Parque México (pictured above) in Col. Condesa, popular with local joggers and dog-walkers.

Alternatively, you can always combine eating and walking at the same time: Check out the culinary tours offered by Eat Mexico for a terrific intro to D.F.’s street food from knowledgeable, multilingual guides. Current offerings focus on tacos, street food, or market food, but customizable tours are available too. 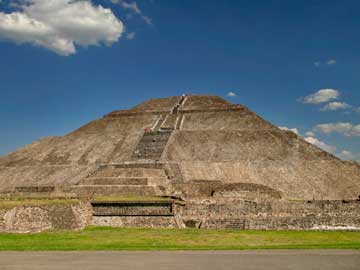 An essential day trip from Mexico City, the enormous, 2,000-year-old archaeological site of Teotihuacán affords a once-in-in-a-lifetime glimpse into a mysterious and complex ancient civilization that had a penchant for elaborate carvings, colorful pictographic murals, and immense, steep pyramids (shown above)—perfect for slogging up following a few days of taco noshing. (No, really—the views are worth it.) The site is located about 30 miles (50 km) northeast of Mexico City, and is reachable by frequent bus from Terminal Central del Norte (Av. De los Cien Metros 1907). Don’t forget lots of water, sunscreen, and good shoes.

To alleviate traffic congestion, Mexico City, following the lead of other world cities, has launched a Sunday bike program called Muévete en Bici, in which roughly 15 miles (24 km) of el Centro, including the eight-lane Euro-style Paseo de la Reforma, are closed to car traffic and open to cyclists (and in-line skaters, etc.) from 8am to 2pm. Moreover, every last Sunday of the month, a full 20-mile (32 km) circuit, the Ciclotón, is open to cyclists during the same hours (much like Bogotá’s Ciclovía). You can borrow a bike for free from government kiosks, including along the Paseo de la Reforma; check this map of cicloestaciones for locations and plan to arrive early.