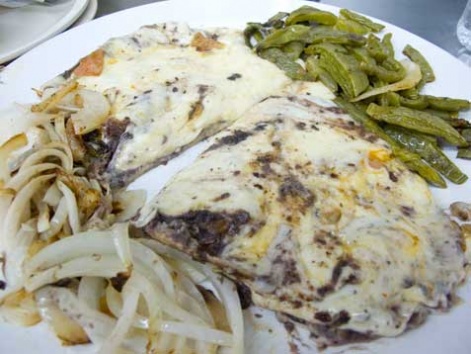 What: Huaraches—meaning “sandals,” and in fact shaped like a big oblong, flat-soled shoe—are thought to have originated in Mexico City in the 1930s. Whether or not that is true, you can certainly find them all over the place today. Fresh masa is flattened and fried into an oblong but thick tortilla, then topped with any number of ingredients, such as meat, cheese, beans, potato, nopales, crema, and of course salsa. Similar to a sope or tlacoyo, these are generally quite massive and messy, but tasty.

Where: We enjoyed a particularly cheesy huarache at Pepe Coyote’s, inside the excellent Mercado Coyoacán (three blocks north of Jardín Hidalgo, at Calles Allende and Malintzin, map) in Coyoacán. Pepe has quite a large menu of cheap, filling, decidedly not-for-dieters meals.

Order: Pictured is the huarache sencillo (49.50p), or “simple huarache,” which was mostly beans and cheese with a side of grilled onions and nopales. Adding meat ups the price to 81.50p.

Alternatively: Your best bet, really, is to try the huarache at the restaurant that’s credited with its invention (or, at least, popularization): El Huarache Azteca (5768-4724; Torno 154, map) in Colonía Artes Gráficas, which is just a bit south of el Centro off the Jamaica metro stop, near the famous flower market, Mercado Jamaica. There you’ll get a more elegant-looking huarache, though be warned the place usually closes by midafternoon. You’ll also find huaraches on lots of other restaurant menus, including taco al pastor fave El Tizoncito (multiple locations including Campeche 362-A cnr. of Cholula, in Condesa, map).