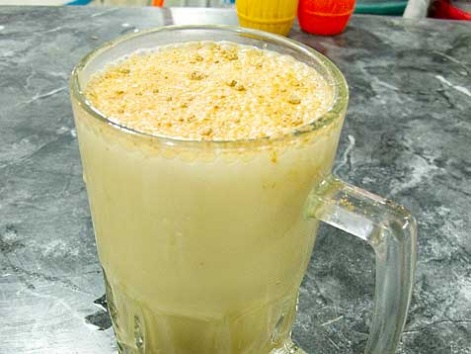 What: Pulque is a thick, alcoholic, ancient Aztec drink made by fermenting the sap of the maguey (agave) plant—the very same earthly source of tequila and mezcal. Its popularity has risen and fallen over the years as it’s gone from sacred (consumed by Aztec priests) to a common beverage (consumed by everyone) to unfashionable to hip again, which is where it stands today.

As for how it tastes? It’s safe to say the pure stuff, the blanco, is an acquired taste—very strong and sour. More palatable are the curados, pulques that are flavored/sweetened by fruits, vegetables, or nuts. But some sort of pulque is a must-try in Mexico, and the capital is home to some fun spots for it, new and old.

Where: We quaffed some pulque at Las Duelistas (Aranda 28, map), a colorful, punky, historic pulquería in el Centro where the music is loud and the clientele (mostly) young. It's safe to say day drinking is acceptable here.

Order: After a taste of the blanco, which the bartender was kind enough to let us sample, we went with an avena, or oatmeal, curado (from 15p), which was much less sour—pretty tasty, actually, with a foamy head topped with cinnamon. Other flavors here include celery, beet, peanut, and guayaba, or guava. You can almost call some of these healthy…right?

Alternatively: Another popular spot in the same area is Pulquería Hermosa Hortensia (Plaza Garibaldi 4, map) on the north side of famous mariachi haunt Plaza Garibaldi.