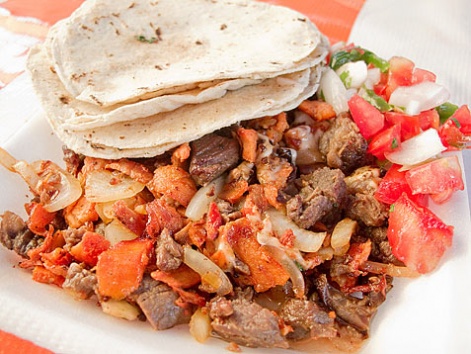 What: Alambre usually refers to a dish made of chopped-up meats and vegetables, including beef, al pastor pork (marinated and sliced off a vertical spit), onions, peppers, and cheese (which gets cooked with the lot, melting it), served with a stack of tortillas. Of course there are variations of this dish; this is how it’s served in Oaxaca and Mexico City but in northern parts of Mexico, the meat is often skewered—the word alambre means “wire,” after all. Or alambre might refer to a taco filling or topping for something else. However you get it, though, it’s going to be delicious—like a Mexican stir-fry meets a cheesesteak, with tortillas.

Where: It shows up on restaurant menus and in market fondas around the country. Ours is from Oaxaca’s Friday Candiani market (near corner of Jorge L Tamayo Castellanos and Calle Martires de Tacubaya, approx map; southeast of downtown, about seven minutes in a taxi). There, at a taqueria called Chatoz, the full-size alambre was so gigantic we had to request a half-order (16p), which was still hugely satisfying. Various salsas were available separately.