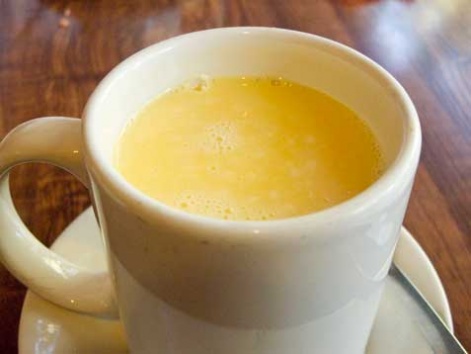 What: Calling atole, a hot beverage with roots in Aztec tradition, “liquid corn gruel” simply doesn’t do justice to its deliciousness. We could happily start our every day with a cup of atole and a moist tamal, as many Mexicans around the world do, and have for centuries, back when atole was meant to fuel laborers through the morning workload. It can be thick and porridge-like or light and watery, depending on the atole maker. Traditionally, it’s made from masa (freshly ground corn dough, or its flour (harina), treated with lime) that is cooked and then boiled with water, sugar, cinnamon, and vanilla; it is especially popular for el Día de los Muertos and around Christmas. But you’ll see it year-round, too, and in many fruit and other flavors—rice, nut, eggnog, chocolate (see: champurrado). Try as many as you can! It’s usually not that sweet, but comforting, filling, and deeply warming—probably why it’s mostly drunk in the morning and evening.

Where: Restaurants specializing in tamales will usually offer various atoles as well, but you’ll most often see this sold on the street in the morning (look for the vendors ladling out of big steel containers). Ours is from Tamales Emporio (Alvaro Obregón 154, map) in Mexico City’s Roma neighborhood, where atole varieties (22p) include guayaba (like a thick, sweet, pink fruit-corn shake served hot) and de rompope (a hot, creamy, smooth concoction with eggnog flavoring). In Oaxaca, we tried a much cheaper, equally delicious atole de arroz (6p) from the torta de tamal morning street cart (corner 5 de Mayo and Morelos); it tasted like drinkable rice pudding, minus the super sweetness.