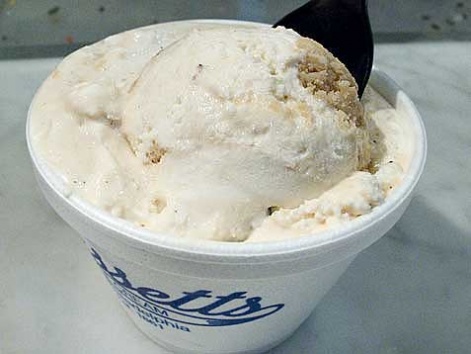 What: The American style of ice cream we know and love today—rich, uncooked, made without egg yolks (and sometimes without any eggs), unlike in parts of Europe—reportedly had its roots in Philadelphia, and is in fact termed “Philadelphia-style ice cream” by food historians. Philly can’t claim to have invented the sweet frozen confection, but it is well known that the city developed a reputation for high-quality ice cream sometime in the 18th century. Even George Washington allegedly dined on “iced creams” back when Philadelphia was the young nation’s capital.

Order: A cone or cup of your favorite flavor (there are more than 40 here, and the staff will give you tastes), though to really try a true “Philadelphia-style” ice cream, make it vanilla (indeed, it’s the most popular flavor here). We had a small cup ($4) of a flavor called Gadzooks Blanc—vanilla ice cream with peanut butter brownie pieces, chocolate chunks, and caramel swirl—and even with all the sweets stirred in, we could taste the incredibly smooth richness of the vanilla bean.