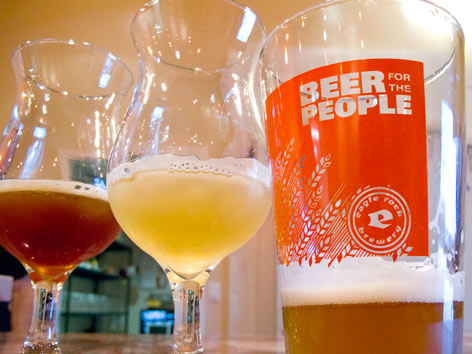 What: The Los Angeles craft brewing scene is not what it should be. Let us rephrase: was not what it should be. Here is a major city in a state crowded with exceptional craft breweries as nationally known as Sierra Nevada, Lagunitas, Stone, Russian River, Anchor, and many, many more. But L.A.? Not such a player. Yet things have definitely changed for the best since 2010, with a slew of good craft breweries ripping through the red tape to set up shop in the City of Angels.

Where: While there are plenty of good beer bars in L.A. these days (more on that later), we like going to the source when possible. In early 2010, Eagle Rock Brewery (3056 Roswell St., map) was the first (legal) brewery to open within L.A. city limits in more than 60 years. A family-owned affair in Eagle Rock-Glassell Park, it’s a great place to meet some of the city’s new wave of craft brewers, beers, and the people who love them. In addition to its own rotating taps—you might try its Populist IPA; Manifesto, a Belgian-style witbier spiced with rose petals; and Libertine, a caramelly Imperial Amber witbier brewed with honey ($5 per pint)—Eagle Rock always carries a few guest taps, usually from other local or regional California breweries. Way to spread the love, guys!

When: The taproom is open Wed-Fri, 4pm-10pm; Sat & Sun, noon-10pm. Tours are offered on Sunday; no reservations needed.

Good to know: The taproom doesn’t offer food, but patrons are welcome to bring in food or order from the ever-changing roster of street vendors that are parked outside (Thu-Sat, 7pm-10pm).

On the brewpub front, the decent handcrafted beers at Bonaventure Brewing Co. (404 S. Figueroa St., map), on the fourth-floor pool-deck level of the Westin Bonaventure Hotel, come with a sweet downtown view on the outside patio; Silver Lake’s Good Microbrew (3725 Sunset Blvd., map) has a great, if pricey, bottled beer selection plus a few house-made (and others) options on tap—which are served in giant frosted glasses unless you request otherwise, FYI—and then there’s Weiland Brewery, celebrated for its double happy hours (3pm-7pm, 10pm-close) and located “underground” amid the office buildings of downtown (505 S. Flower St. Suite B-410, map).

Other area breweries to look for: Established in 1995 in Pasadena, Craftsman Brewing Company has long been popular among local beer nerds, particularly for its innovative specialty beers like the winter seasonal Cabernale (a lager made with cabernet sauvignon grapes); there’s also Skyscraper Brewing Company (between locations as of March 2013), whose facility supports other breweries as well (this is where The Great Beer Company’s Hollywood Blonde is brewed, as well as The Gentleman Scholar’s Requiem Espresso Stout).

Further away, to the south in Orange County, The Bruery in Placentia has garnered lots of attention for its big, envelope-pushing beers, many of which are Belgian-style, aged (in, say, red wine or bourbon barrels), and complexly flavored with ingredients like Thai basil, anise, or bourbon-soaked oak. A handful of its beers are well above 10% ABV, with one seasonal, the year-aged Black Tuesday Imperial Stout, notorious for getting up to 20% (released in the fall; available at the brewery only). San Clemente-based Left Coast Brewing is also from Orange County, producing its own line of “West Coast-style” beers (like the popular Hop Juice double IPA) while also acting as brewing facility for Oggi’s Pizza & Brewing Company, a small chain with locations across Southern California and beyond.

L.A. beer bars: Let’s cut to the chase: Where to best sample these SoCal goodies? A guy named Tony Yanow (who also spearheaded Golden Road Brewing) has made the answer easy with two locavore-friendly gastropubs: Tony’s Darts Away (1710 W. Magnolia Blvd., map), a Burbank dive bar turned hipster hangout that only serves draft beer from California, offering at least 30 at any given time; and Echo Park’s gargantuan Mohawk Bend (2141 W. Sunset Blvd., map), where you’ll find California artisanal everything (including 72 beer taps!) in a retrofitted century-old Vaudeville theater. Other popular spots for Cali/American craft beers are West Hollywood’s The Surly Goat (7929 Santa Monica Blvd., map) and Santa Monica’s Father’s Office (two locations including 1018 Montana Ave., map), which is as celebrated for its killer burger nearly as much as its beer menu. In Pasadena, there’s the beloved Lucky Baldwins Pub & Café (two locations including 17 S. Raymond Ave., map), which counts lots of Cali beers (and hyper-locals, including several from Craftsman) on its impressive 100-plus list; in Sherman Oaks, look no further than the beer-geek-certified Boneyard Bistro (13539 Ventura Blvd., map) and its exceptional bottle and draft list that often includes hard-to-find brews from overseas.

Beer stores: Echo Park’s Sunset Beer Company (1498 Sunset Blvd., map), which opened in fall of 2011, was the city’s first all-beer bottle shop/tasting bar, where you can buy a bottle, drink a bottle, drink a draft, leave with a bottle—or all of the above. Note: It’s BYOF (bring your own food). Even newer is the incredible 600-plus beer selection at Galco’s Soda Pop Shop (5207 York Blvd., map), in Highland Park, hitherto known for its incredible nostalgic soda-pop collection. The new addition consists of 10 refrigerated cases of artisanal beers from around the world, including many regionals.