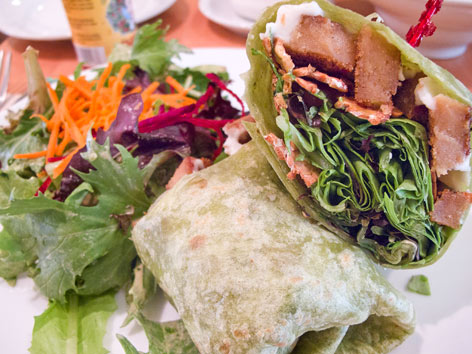 What: Tacos and chili cheese dogs aside, Los Angeles tends to conjure up thoughts of skinny girls and ripped men rollerblading beachside, drinking soy lattes and eating organic vegan wraps before hitting up an afternoon Bikram yoga class. Blame it on countless movies and TV shows…but sometimes the shoe does fit (we’re looking at you, Santa Monica!). It’s true there are a lot of vegan/vegetarian cafes in L.A., and, as health-conscious lovers of pork belly—and walking oxymorons, perhaps—we are going to make a controversial suggestion to the carnivores among you: Try vegan food! L.A.’s vegan scene is far more advanced and gourmet than that of most U.S. cities, and many of the restaurants happily reflect the city’s ethnic diversity. Give it (and peace) a chance.

Order: Pictured is the excellent club wrap, with seitan, tempeh bacon, avocado, lettuce, tomato, and vegenaise ($15; also available as a triple-decker on sourdough bread)—it was delicious, satisfying, and actually tasted like a club sandwich. But the menu is long and varied, with some Mexican (“diablo tacos,” with spicy braised jackfruit), Asian (ramen bowls, filo samosa), and Italian (lasagna with cashew ricotta, pizza, calzones) influences. There are soy-, wheat-, yeast-, and gluten-free options as well.