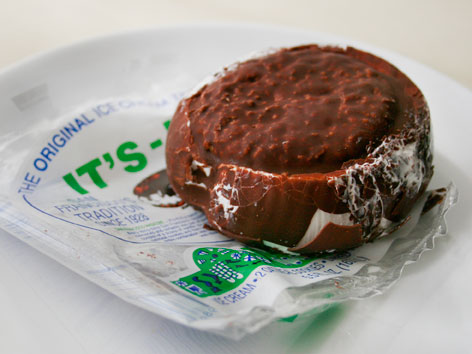 What: It’s-It ice cream sandwiches are a San Francisco corner-store staple, with notable ties to the city’s past: Invented by George Whitney in 1928, the sandwiches—a scoop of ice cream between two oatmeal cookies, dipped in chocolate—were sold at his shop across the street from Playland at the Beach, an oceanfront city amusement park that shut down in 1972. Two years later, the It’s-It name was revived when production moved to Burlingame, California, and the sandwich’s popularity has prevailed over the years. It’s not hard to see why: The chewy, cinnamon-rich cookies, creamy ice cream, and dark chocolate layer are the perfect combination of sweet flavors. Vanilla ice cream is the classic It’s-It flavor, but the 1974 rebirth saw the addition of cappuccino and mint, which are also excellent.

Where: It’s-Its are available at a wide variety of corner stores and groceries in San Francisco. Ours came from a neighborhood spot called Rosenberg Deli & Market (415-241-0121; 276 Noe St., betw. 16th & Beaver Sts., map), in Duboce Triangle.

When: Hours vary, but it tends to stay open late.

Order: An It’s-It ice cream sandwich ($1.50). Mint and cappuccino are great, but we love the nostalgic sweet creaminess of a vanilla Its-It sandwich.

Alternatively: For these ice cream sandwiches, check out the freezer section of your local corner store/grocery (also see the company’s distribution list). Or, expand your horizons: It’s-Its aren’t the only in-demand ice cream in San Francisco. Try the delicious scoops of salted caramel, honey lavender, or strawberry balsamic ice cream at Bi-Rite Creamery (multiple locations including 3692 18th St., at Dolores St., map), or get adventurous with the gonzo flavors at Humphry Slocombe’s (multiple locations including 2790 Harrison St., at 24th St., map), like Secret Breakfast—ice cream studded with cereal pieces and laced with bourbon.