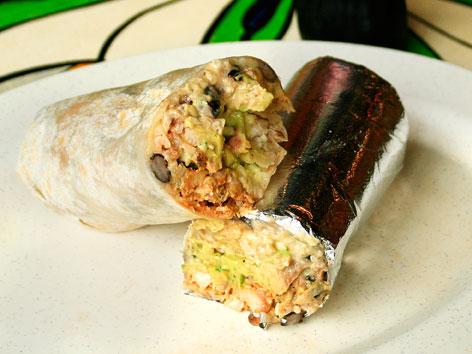 What: There’s some debate in California about what makes a proper burrito. Down in Southern California, you’ll hear outrage at the inclusion of rice and any vegetables—in San Diego, they replace both with French fries. But San Franciscans passionately stand by their behemoth creation: the Mission burrito, filled with meat, beans (black, pinto, or refried), rice, and—if you’re doing it right—guacamole, sour cream, cheese, and salsa. Meat choices vary, but tend to include carne asada, pollo asado, and carnitas (that’s grilled steak, grilled chicken, and slow-cooked pork); you’ll often also find seafood options (camarones, or shimp), al pastor (marinated/barbecued pork, usually with pineapple), and even vegetarian options like tofu ranchero—this is San Francisco, after all. These are meant to be full meals wrapped in flour-tortilla form, or maybe even two meals if you can’t stomach a whole burrito in one sitting.

How to eat these babies? With your hands: Unwrap the foil as you go to keep the innards from spilling out (this also makes it easier to wrap up should you need to take some to go). Think of them as hand-held, old-school Mexican combo plates. And don’t worry—they are delicious left over, even cold from the fridge.

Good to know: The “Mission” in Mission burrito refers to the San Francisco neighborhood—long a major center for the city’s Latin-American population—where these burritos gained popularity in the 1960s. Today, it’s one of the hottest, and most hotly debated, areas in SF: Once a bastion for artists and immigrants, the Mission District is now home to some of the city’s highest rents, trendiest restaurants, and hippest residents. But the mom-and-pop taquerias have held on, thanks in part to their unshakable popularity. You can find burritos in other parts of San Francisco, but the ones in the Mission proper are consistently the best. The top spots always warm the flour tortilla on the griddle, making the wrapper more pliant and picking up some of the delicious cooking flavors.

Where: Asking a San Franciscan for their favorite burrito spot can lead to major debate—everyone has personal favorites and they stick to ’em. We happen to love the tightly wrapped specimens at El Metate (2406 Bryant St., at 22nd St., map), where the meats are flavorful and fresh and the fillings layered in such a way that each bite’s a well-balanced mix of meat, rice, beans, cheese, and sauces.

Order: A super burrito ($7). In addition to the requisite meat, rice, and beans, a super burrito also includes cheese, guac, and sour cream. We like ours with black beans and carnitas, but order whatever meat sounds, or looks, best to you (and don’t be afraid to ask for advice from your burrito maker if you’re unsure). Do help yourself to El Metate’s generous salsa bar—choices include a fiery salsa verde, made with green chiles and tomatillos, and some excellent tomato-based options, too. Don’t fill up on the delicious, freshly fried tortilla chips, though—you’ll need the stomach space.

Alternatively: There are so many good burritos in the Mission that it’s hard to pick just a few. La Palma Mexicatessen (2884 24th St., at Florida St., map) is a must—it makes its tortillas fresh, which makes the burritos very special. Papalote (3409 24th St., betw. Poplar & Valencia Sts., map) has some of the best salsa in town, while El Farolito (2779 Mission St., at 24th St., map) is widely celebrated for its greasy, meaty flavor bombs. Taqueria San Francisco (2794 24th St., at York St., map) is another favorite in the ’hood, and Taqueria Cancun (2288 Mission St., at 19th St., map) is your late-night go-to. We can keep going, but that’s a lot of burritos to eat…